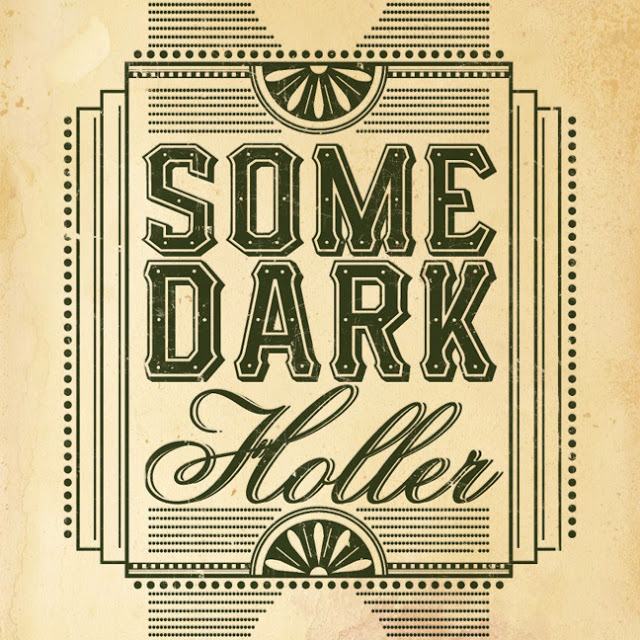 “Following up their well received debut EP, Birmingham, AL’s Some Dark Holler release their first full length album, Hollow Chest on August 20, 2012 with This is American Music. Combining equal parts Steve Earle, the Civil Wars (if they were drunk), and Breaking Bad, bandleader Chris Porter (Back Row Baptists) and fiddler Helen Gassenheimer bring a mix of vocal and instrumental stylings that are as flawlessly harmonious as they are dark and haunting. Hollow Chest explores and exposes the South’s gritty underbelly and its rawest nerves. Each tale is made all the more personal by the Porter’s dry, gravelly snarl– a voice perfect for his broken characters who would seem all but damned if not for the angelic redemption found in Gassenheimer’s harmonies. Straightforward, uncomplicated, and unpolished, these songs resonate like the old Appalachian ballads from which they are clearly inspired. Their simple potency is highlighted by the understated production skills of Jody Nelson (Through the Sparks). Fans of acoustic music and vocal chemistry will find Hollow Chest remarkable both for the prowess of its players and the dark beauty of its songwriting.”

Some Dark Holler has been on my radar since releasing it’s latest, “Hollow Chest” a few months ago. If you like your authentic Southern folk music a tad on the ‘eerie’ side (who doesn’t), then this is your bag. Check them out on Facebook, WordPress, Tumblr, Soundcloud and Twitter. My thanks to Chris Porter (Guitar/Vocals) for taking the time to participate in this edition of First/Last.

Wow, you would think that this would be an easier question to field. The first record that I ever picked out and had my parents purchase, was a used cassette copy of “Pet Sounds” by The Beach boys, followed by the soundtrack to ‘Footloose’. Laugh if you will, I needed a hero. I can recall my dad thinking that “Pet Sounds” was an odd choice, but I liked the cover, and to this day that record stands out as one of my oldest and longest friends. The first record that I saved my money and purchased was most likely “Paul’s Boutique” by The Beastie Boys. My relationship with Hip Hop was super strong when I was a kid and the Beasties are one of those acts that really draw you in. There are countless acts that I love today that came from my love for the Beasties.

Aesop Rock’s “Skelethon”. He’s hands down the most innovative lyricist on the planet. I don’t buy a whole ton of music, (beyond my friends records) so when I do, I tend to lean toward Hip Hop as an escape from all of the sad bastard stuff that I write.

WOW!! This one is impossible!! I’ll make a short list, and try to be brief. Warren Zevon, “Excitable Boy”: This record was in my life fairly early and the darkness of Zevon’s lyrics never escaped me. There are very few records that I honestly prefer on vinyl versus CD and this is one of them. Randy Newman, “12 Songs”: Randy’s snarky take on cultural diversity mixed with his amazing sense of pop melody make this record near the top of my list. There has never been a better songwriter than Randy, and “12 Songs” is one hell of a ‘concept album’. Tom Waits, “Bone Machine”: This record scared me to death when I first heard it. It still does when I want it to. Brian Wright and The Waco Tragedies, “Bluebird”: I know Brian, and have had the pleasure of playing with him once or twice. His tunes carry weight that men spend their whole lives trying to capture. Look him up.

Other than ones that I have made? I remember the day that I realized that I am not a Beatles fan. It was liberating. Not to say that they are not super important, just not my jam.

Soul Asylum, The Screaming Trees, and the Spin Doctors.

Wigginstock. It was the absolute holy shit.

Beck at The Tabernacle in Atlanta. Beck, his band, and puppets. Look it up. Twas rad.

I’m generally not that into mega festivals. Having to choose between two great headliners and drop tons of money to do so bugs me. I’ve been to plenty that were really great, and some that were just lame.

Myself, Pete Stein, and Jay Taylor came through on tour a few years ago during a crazy blizzard, that had pounded the entire eastern half of the U.S. We rolled into Pittsburgh on the day that they opened the interstate for the first time in a few days. We played at this place called Howler’s and managed to draw enough folks to land us a place to stay and quite a few drinks. I left Birmingham with a down vest and a pair of Chuck Taylors. Times were tough.

Thanks, Chris. From what I can tell, Wigginstock was amazing. R.I.P Chris