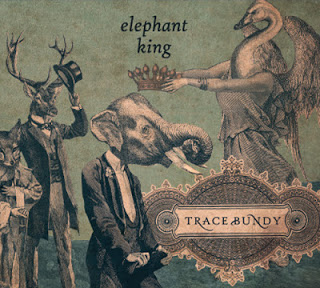 “Trace Bundy must be seen, not just heard. His music is poetry in motion, using harmonics, looping, multiple capos, and his unique banter and stage presence to deliver an unforgettable live concert experience. Listening to his intricate arrangements is one thing, but seeing the fan-dubbed “Acoustic Ninja” play live confounds even the most accomplished music lovers as to how one person can do all that with just two hands and ten fingers.”

Trace returns to Pittsburgh tomorrow night at the T’Bird supporting his latest 2012 release, “Elephant King” on What Are Records? My thanks to him for taking the time to participate in this edition of First/Last.

Probably Def Leppard, “Hysteria”. I was a huge fan. To this day I have a Def Leppard pillow that I won’t let my wife take to a thrift store.

I bought the new Mumford & Sons album today. So good.

It’s a tie between Pink Floyd, “Dark Side of the Moon” and Beatles, “Abbey Road”. I collect vinyl and have a pretty extensive Beatles collection, a bit of a nerdy side hobby of mine.

I’m a pretty big U2 fan, but I must say their 1997 album “Pop” was pretty disappointing.

Besides my brother’s high school heavy metal band, it was probably David Wilcox, who remains one of my biggest inspirations and musical influences.

I think it was my buddy Josh Garrels. He’s amazing and exploding right now. I also saw Bon Jovi recently, which felt like I was literally transported back to a 1980’s aerobics class. Wow.

This one is hard to answer. So many shows are epic in some way. David Wilcox’s shows have always impacted me. Ani DiFranco puts on a great show. And seeing U2 in Boston was incredible.

My wife & I went to see Jose Gonzales a few years ago. We love his music, but he barely uttered a word during his show! I could have had the same experience listening to his album at home. Concerts are a chance to get to know an artist, so I left that show a bit disappointed.

Pittsburgh totally surprised me. It’s a super interesting, funky, artistic town. The last time I was there I found a bunch of Beatles records to add to my collection, which obviously made me love the town even more. I’m looking forward to coming back, and wish I had an extra day or two to explore.

Thanks, Trace. I am slowly discovering a small but fervent subset of audiophiles in our culture that are OBSESSED with all things Beatles and might have to declare you one of them!