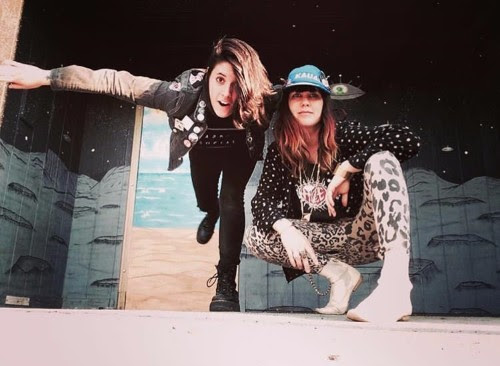 Vanessa’s live show stirs up memories of Nirvana, The Pretenders, The Ramones, Patti Smith & Neil Young. Such comparisons are worthy for a musician like Vanessa who’s performed OVER 330 shows in the last 2 years!Vanessa recently wrapped up a western US tour this summer with Carissa Johnson and a west coast trek with Reed Mullin (drummer) of Corrosion of Conformity and Mikel Ross (producer/musician).

Carissa Johnson and her band became the first female-led band to win the storied Boston radio festival Rock and Roll Rumble since the Dresden Dollswon it in 2013. Carissa’s debut full-length album was recognized as “Album of the Year” by the Limelight Music Awards.”

Vanessa Silberman and Carissa Johnson begin their co-headlining tour this Friday (11/24) in Pittsburgh at Hambone’s with support from longtime blog fave Nik Westman (NYC via PGH), Merilette (TX), and local songwriter Lyra. This show might be the perfect gig to blow off any of those Thanksgiving cobwebs accumulated over the past few days. I want to thank both Vanessa and Carissa for taking the time to participate in this edition of First/Last.

Vanessa Silberman: First album was a tape of Green Day Kerplunk! at Rasputin in Berkeley & shortly after I got 10 CDs for a penny through Columbia House (that included Nirvana, Silverchair, Weezer, Green Day) but I also was bought an Inner Circle (they had the “Cops” theme song) CD by my aunt around this time.

Vanessa: Ha-ha, I can’t remember. I just played over 330 something shows in last 25 months but I think Foo Fighters at the Forum.

Vanessa: Foo Fighters at Henry Kaiser Auditorium. Filter at the Warfield. Carissa: Grace Potter and The Nocturnals in 2010.

Vanessa: I had one that I was so let down by I went home & cried. The singer/guitarist (who’s name I prefer not to mention) I think was on a lot of drugs & probably going through a very difficult time. So in a way it’s made me really want to focus on the positive & not destroy my life especially being a public figure. As an artist, it’s what I signed up for & my duty to set a good example & help bring a positive message through music & give people that in a live experience somehow too.

Vanessa: Love it! Love the historical aspects to the city & it has such a cool supportive music scene. Had some amazing experiences playing at there & really looking forward to this show at Hambones & connecting with the community.

Carissa: I went for the first time in the fall of 2015 and loved the lights and bridges of downtown.

Thanks, ladies. Hambone’s will be pumpin’ on Friday with that great lineup. Have fun!