First/Last-Walk A Mile in Her Shoes 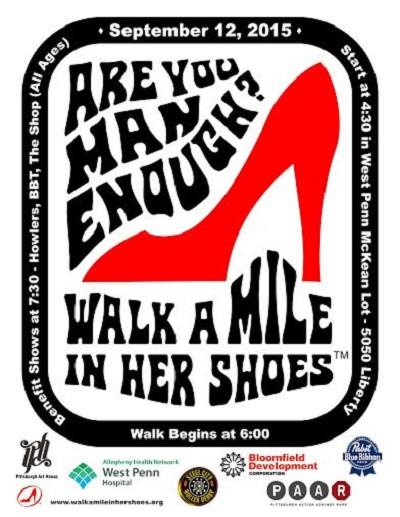 “There is an old saying: “You can’t really understand another person’s experience until you’ve walked a mile in their shoes.” Walk a Mile in Her Shoes® asks men to literally walk one mile in women’s high-heeled shoes. It’s not easy walking in these shoes, but it’s fun and it gets the community to talk about something that’s really difficult to talk about: gender relations and men’s sexualized violence against women.”

Walk A Mile in Her Shoes is a men’s charity march to stop rape, sexual assault and gender violence. The idea is to have men ‘uncomfortably’ walk in hi-heel shoes for a mile. I am proud to participate this year in Pittsburgh on Saturday (9/12) as we march through Bloomfield at 6pm and then take in a bunch of cool bands in several locations. Registration (team or individual) is still open here and you can pay a blanket $10 donation to be admitted to the various venues later in the night. I want to thank event organizer Camille Goleb for taking the time to participate in this edition of First/Last.

Smashing Pumpkins “Greatest Hits”. I was twelve, I think. My mom went with me and grilled the checkout guy on the lyrical content, just in case it turned me into a weirdo. Sorry, Mom.

Andre Costello and the Cool Minors, “The Rattling Arcade”.

“El Cielo” by dredg. Both live and recorded, it’s so multilayered and brilliant, it really takes me to another level entirely. And Dino the drummer is a fucking ANIMAL.

Recent Pumpkins stuff, honestly. It just doesn’t do what it used to do for me, and every time I hear it I can see my high school goth self-punching herself in the ears.

Big concert? No Doubt, Blink-182, and the Living End. I was the lame kid who wasn’t allowed to go to Warped Tour, but Mom’s got a thing for Gwen Stefani.

Dean Ween Group. Balcony seats with wonderful company + seeing Dean Ween’s nipples before the show = the most fun I’ve had outside of a GWAR concert.

dredg, Judgement Day and Telescreen in Baltimore in my college days. Standing there with my eyes closed being surrounded by that gigantic sound is a happy place I don’t think I’ll ever stop going to.

Bob Dylan, circa 2007. He was so stoned off his ass that I couldn’t recognize a single song. I kept wondering if he had died, but then he’d plonk out another chord. He’s a genius, but I’ll stick to hearing him through earbuds.

I know three languages and I still don’t have enough words to describe how much I love this city. Taking in Weather Permitting while lying on the lawn, walking the Sister bridges at lunchtime, finding myself jamming with Randy Baumann in his basement at 4am surrounded by some of the most incredibly talented musicians I’ve ever had the honor of meeting. Pittsburgh gave me a place to belong when I had none, wonderful friends when I needed them, and a soundtrack to the best years of my life so far. I’m so happy every day because I moved here.

Thanks, Camille. Great cause and great job organizing the event. I’ll make sure to buy you a beer later on if I’m still standing.