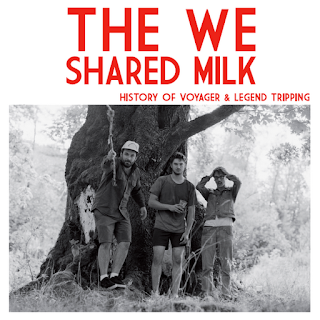 “The We Shared Milk, originally Alaskan, have spent the last two years in Portland gigging constantly and self-producing a large volume of their psychedelic rock. Ranging from solid Lennon-influenced songs to driving psych jams, the shows are riff-filled and high energy. The We Shared Milk have recently finished their first full length album History of Voyager & Legend Tripping and are heading out across the country to promote its release. History of Voyager… is more of a project than a normal release, with each original TWSM song produced by a different Portland, Oregon band. It documents not only the current scene in Portland, but also a deconstruction of what can often be a cliquey and competitive atmosphere.”

The band plays GarfArt this upcoming Wednesday night on a bill with The Dig and The Dirty Feathers supporting their recently released, “History of Voyager & Legend Tripping“. My sincere thanks to frontman Boone Howard for taking a few minutes to participate in this edition of First/Last.

Thanks, Boone. I must say, your band name is unique amongst a plethora of unique indie band names. Would love to know the origin sometime.