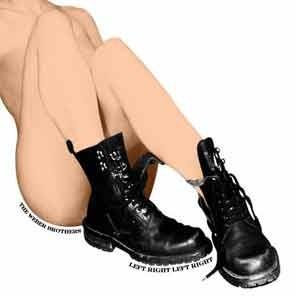 “1980-83: Ryan and Sam Weber born in Baltimore, MD. 1992: Sam receives a guitar for Christmas, Ryan gets a bass soon after. 1992-2000: The brothers play in various local bands in and around their hometown of Westminster, MD: A.W.O.L., Illegal Aliens, and Northern Lights. Sam playing in bars by the age of fifteen, often before having to get up for school the next day. 2001: On a whim, Ryan emails rock-a-billy legend Ronnie Hawkins. Hawkins responds and they send him a demo tape. They are eventually invited to his home in Ontario to audition for his acclaimed band ‘The Hawks’. After traveling on their own to Chicago, Nashville, and Amsterdam in the following months, they get the call from Hawkins to come back to Canada, saying he had jobs for them. Ryan and Sam leave everything behind the next morning and head north to Hawkins’ farm to begin his infamous 90 Day Boot Camp. To earn their keep, they do farm wor during the day, and, under Hawkins’ watchful eye, play music in their free time. They go through the same process many ex-Hawks had gone through years before: farm hand, roadie, driver, merchandise handler, before eventually joining the band and becoming official members of ‘The Hawks’. Touring begins.”

Check out the band at it’s official Website, Facebook, Twitter and MySpace. My thanks to brother Ryan Weber for taking the time to participate in this edition of First/Last.

That’s a tough one for me to remember right now, tough to exactly recall. I remember the first album I had though, just not sure if I bought it or borrowed it and that was “Appetite for Destruction”, Guns n’ Roses first album. I know I had to sneak listening to it because of all the cuss words in it, Mom and Dad didn’t want me listening to words like that at that time. I think I was seven and Sam was about four or five. We used to sneak off into my room when Mom and Dad were in the yard mowing the grass to listen to it, we figured with the lawn mower going it would be loud enough they wouldn’t hear what we were listening to. They would inevitably find it, but I would get copies of it from friends.

Your last album bought?
I got Springsteen’s newest album and Dylan’s newest one too. Love them both. Favorite album of all time?

You know, that can change depending on the mood I’m in, I think. “Plastic Ono Band” would be way up there by John Lennon. “Songs in the Key of Life” from Stevie Wonder. Any Beatles album too.

I’m not the best to ask on that, it’s rare that I don’t pick up something good on anything I listen to. It’s all got soul that I hear, and there’s good things about it. There is one song I really can’t stand and that’s ‘Waiting On the World to Change’ by John Mayer. He is a great artist and everything I know and his other stuff is good, but that song bugs me. I can’t relate to that kind of idea. You got to pull the weeds out of the garden if you want a flower to grow.

Two come to mind, not sure which was first. Asleep at the Wheel and Aerosmith. Saw Asleep at The Wheel with Mom Dad and Sam at a festival, they were just great. I remember thinking that, but I don’t remember the show that much or the sound, just that I enjoyed myself. Aerosmith we saw at Hershey Park. Spent the whole day riding rides and eating funnel cakes and then saw one of the best bands play one of the best shows. What is not to like about that day for a boy around ten years old? It was the best. It was around the “Get a Grip” album, whatever year that was. They had so many hits on that album and we loved them all and they played them all, just a great concert. I might have known right then that this is what I wanted to do, that we could do it and that we could do it as good as anybody.

I saw Springsteen twice this past summer. Probably the greatest show on Earth, musically speaking. There is no one like him and no show like his. He gives so much, its always 150%. Plays for so long and so hard and just so fantastic. True inspiration, makes me think if he can do it at 64 or however old he is, than we have got to be able to do it now. He remembers that it’s about fun, and that it IS fun to do what we do. What it’s about is celebration, celebrating life and freedom and rock and roll, it’s that. For however long the band plays, you can put down your worries and your cell phones for that time and be free. That is what we have always been about, something I too realize. The band and the audience are one, not separate, takes both of them to make the magic of the night really happen, and there is no one better at not only realizing that, but magnifying that than Bruce and the E Street.

Another one I’m not the best at answering. People who know me know that every time I come back from a concert I say, “That was the best concert ever” and I mean it each time. If someone really gives it and really moves me than there is no better or worse, I gauge it on the emotion it made me feel. I have been fortunate to have been very, very moved many time at concerts. And not just big time ones, I have seen things in a club that make my hair stand rigid.

Maybe the Red Hot Chili Peppers when I was once in Toronto. Nothing against them either. I took my girlfriend at the time with me, they were her favorite band and one of mine too, but she wasn’t having the best time. Our seats weren’t the greatest, she wound up wanting to leave before the encore. I was like “How can you leave before the encore?”

Played some very good gigs there, met some very great people there. Really good rockabilly scene from what I’ve gathered. which I always love, playing with Ronnie Hawkins and loving rockabilly like I do. Always great to find a place that is keeping it alive and Pittsburgh is one of those places. It’s a real rockin’ town. Can’t wait to get there again actually, to reach for the stars with some new and old friends. Pittsburgh, The Weber Brothers are comin’ to town!!

Thanks, Ryan. I’ve heard some raucous things about your live show! Also, I second the praise of all things Springsteen.