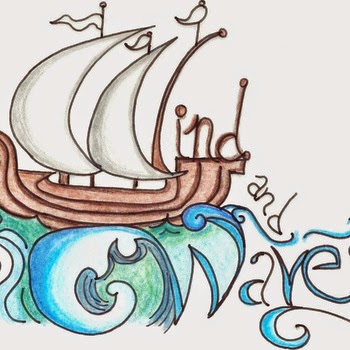 Logo courtesy of Angelica B. (design) and Aura T. (coloring) “Wind and Waves is three piece band from Monongahela about 30 miles southeast of Pittsburgh. It was formed by violinist Joanna P. and multi-instrumentalist Adam KM. They started playing music together at their local coffee shop’s open mic nights for a few years before having the idea to start an original music project. Bassist Zac S. was added to the lineup after a lengthy impromptu conversation in late 2012. Focusing on original music they began to write and develop a unique type of indie-folk sound due to their very different musical tastes. Joanna is classically trained violinist. Zac is an excellent bassist rooted in 90’s and contemporary rock. Adam a self-taught “we’ll see how this sounds” instrumentalist who started his musical interests playing drums.”

The indie-folk trio hailing from Monongahela are regulars at Little City Coffee and are working on finishing up their first demo tracks by the end of Summer. I want to thank Zac (Bass), Joanna (Violin) and Adam (Multi-Instruments) for taking the time to participate in this edition of First/Last.

Thanks, guys. Really looking forward to the new demos. Gonna have to head to Monongahela real soon.