Image of the Day-“The Chorus!” 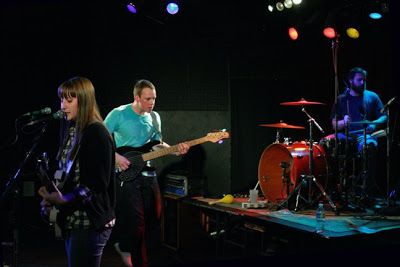 This was a phenomenal show. The band seemed excited and the crowd was very enthusiastic. Thanks to Jake, I was familiar with all of the songs that they played which sounded great live. Even the jaded sound mixer was impressed with the music and the turnout for the show. With soundcheck, the opening bands, and the show itself, I ended up taking more pictures at a concert than I ever have before. I have 11 GB of memory with me and I never thought that I would use that much in a single night. By the last song I was actually erasing blurry pics to keep on snapping. It always fascinates me to talk to musicians. I am always intrigued how they balance ‘band life’ and ‘ordinary life’. To me, I guess I have this idyllic notion that Donora supports itself through record sales and touring. Reality says different. Most people in bands have ‘normal’ jobs and unless they become freakishly popular, their music is an outlet that they are able to pursue either diligently or casually. There has to come a time in a band’s career when they have to choose I suppose. That to me would be a scary prospect. The uncertainty of the business and how it could change your perception of things. Whoa, heavy stuff.