Image of the Day-“The Fool” 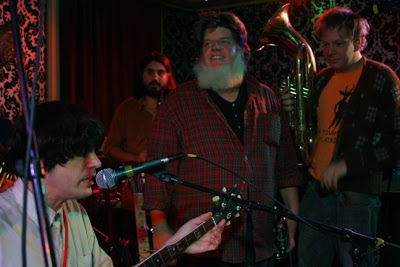 Several times throughout the night, among the many instruments Julian was playing, was his signature ‘singing saw’. I can’t remember ever seeing someone playing one seriously, if at all. He definitely could play it and quite well I might add. The texture he added to the tunes with the saw was both odd and beautiful at the same time, which is an apt description of the entire concept of the show, the bands , and the night itself. Watching him perform with Scott Spillane in the middle of the crowd was a wonderful moment. This whole shebang was the brainchild of organizer Julian Koster. My only prior knowledge of him was his being a member of Neutral Milk Hotel.

My mistake. His energy, enthusiasm, and ultimately performance was so damned endearing, I have quickly become a fan of his ‘other’ work. More Julian tomorrow.Below is the version from Boston