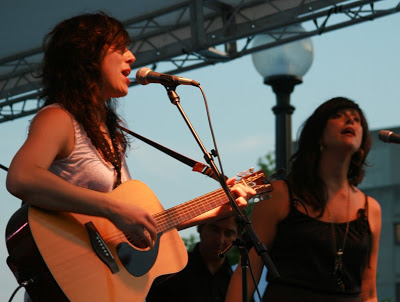 Schenley Plaza I absolutely LOVED Jenny Lewis’ 2006 release Rabbit Fur Coat. Getting a co-billing on that album as well as significantly contributing to the overall sound of it were then unknown sisters Chandra and Leigh Watson on background vocals. Their new debut solo album Fire Songs is just O.K. It is a tad mellow and lacks a certain something that I was hoping for (maybe Ms. Lewis?). Their live show however is nothing liked I was suspecting/dreading. Sure they aren’t AC/DC, but they were way more upbeat in concert. As my boy Brian, noted their in between song banter was a bit painful but the beautiful music more than made up for it. My brother even compared them to Lucinda Williams, which isn’t a bad thing at all. They mentioned that they took a red-eye from L.A. to play the gig mainly because their Mom and Dad are living in the area and they had a sorta mini-family reunion. They were very, very sweet and nice when asked for autographs.