Image of the Day-“A Sunshine Fix” 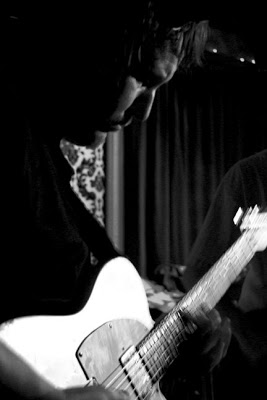 One of the bands on the bill I was very eager to finally see live was Olivia Tremor Control. Their albums have an unsteady flow to them, interspersing weird (read: dumb and unnecessary) noise interludes with some of the freshest psychedelic pop songs I have ever heard. Thankfully most of the ‘real’ tunes I love from the two albums I have were played. What really struck me that night was seeing front man Will Hart unleash his craziness. The guy seemed nuts sometimes onstage. I didn’t notice a moment when he didn’t have a drink in his hand (unless he was playing an instrument). After the show he was asking everyone and anyone for weed. He lost his voice half way through the show, I’m sure a little toke of marijuana would have helped.

I first met Bill Doss when he was playing with The Apples In Stereo. He assumed a more prominent role on this night. In fact, along with Julian Koster, he seemed to be running the gig. He is such a nice guy as well.