Image Of The Day-“Tornado In The Trailer Park” 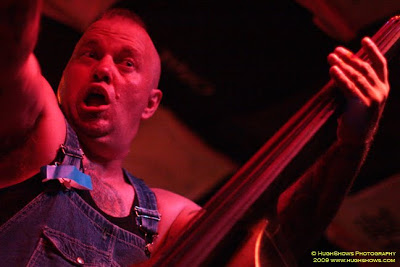 All this week, I am going back in the archives and featuring bands that have been opening acts to other artists. I actually could spend two weeks featuring these little bands that I forgot, or rather never had time to feature, until now. First up is Rumbledaddy, a damn fun rockabilly trio from Ohio who opened for Wanda Jackson. They seemed to be having a hell-raisin’ blast (there was actual fire on stage! that I totally missed changing lenses) and played their usual set but had to stretch it out as Ms. Jackson was taking her good old time. Nobody minded as we were all excited to see a legend perform. The guys valiantly played on for what seemed to be another hour before finally getting the cue that Wanda was ready. Nice job boys!