Image Of The Day-“World Sick” 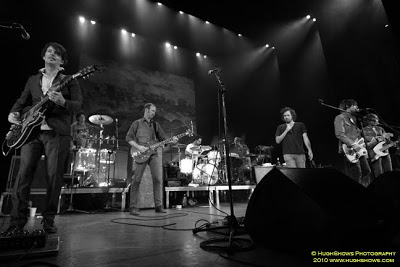 I have to admit, I was disappointed in this show. Their latest album is a top ten contender for me and my expectations were maybe too high for that reason. Several things marred this performance for me, first and foremost is that the band just didn’t seem to be into it, despite the fact that Kevin came out and announced that he and Brendan were celebrating recent birthdays. Could they have been hung over? Last time they played here, Brendan was jumping all over the stage. This night he was a zombie. Four songs in, Lisa Lobsinger came out and sucked whatever minuscule life was left in the room to bring the performance to a dead stop. The other off thing was the room. I love the Byham. I just don’t think it’s suited for a rock show. Some people want to dance, some want to sit. This isn’t the venue to accommodate for both. Maybe I am a bit too harsh but I was hoping for a stellar show and did not get one by a long shot. They were good, not great. More photos here.