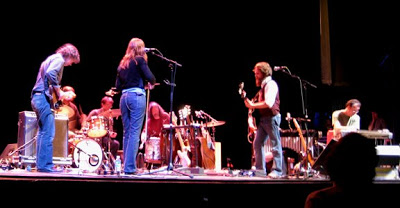 I like Iron & Wine. I don’t LOVE them as some people do but they’re aiight. The other night they played for two hours and change and man could they have trimmed the show a bit. They went on and on and on and…

My belief is that the crowd, who were totally asleep during the show, might have sucked out all the excitement from the band. Sam even commented on it from the stage!

Regardless, they were a tight as hell bunch of musicians. Maybe in a relaxed, outdoor setting it would have worked better for me but I think I fell asleep twice during the set.

On another note, I worked really hard to try to draw a decent portrait of the guy and after several attempts and two drafts they still didn’t turn out as well as I would have liked. As he was signing my prints, I asked Sam, ” Do you think they look like you?” His deadpan response, “Well, he has a beard.” Classic.