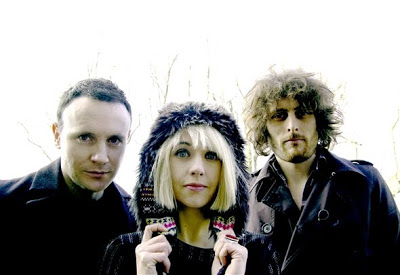 The Joy Formidable are a Welsh band releasing their debut album in March and are touring the US to celebrate. They have been described as “primal epic grunge rock à la The Breeders, Arcade Fire and Yeah Yeah Yeahs“. They make a stop in Pittsburgh with support from The Lonely Forest. Courtesy of my friends at Drusky Entertainment, I have a pair of passes to the show for a lucky reader of this blog. All you need to do to enter is email me at hughshows@comcast.net with the subject line ‘The Joy Formidable’. In the message, supply the full name you want for the folks at will call the night of the show which will be good for two tickets. Bring I.D. and remember this is an all ages event. One entry per person. This contest will run until Saturday, February 5, when the winner will be randomly chosen and contacted.

This band is about to ‘blow-up’ so this is a rare opportunity to catch them and brag to your friends that you saw them when they were still playing clubs! I totally expect this show to sell out. Rolling Stone declared them “Band Of The Week” and you can catch interviews with them at Virtual Festivals and Stereoboard. Good luck.