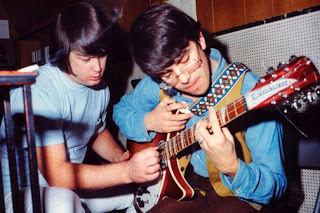 I was so excited to stumble upon this band. They are what I wish Fleet Foxes were. Indie psych folk that’s not all hype and has some substance. Nothing against Fleet Foxes, they just bore me. This band are able to effortlessly switch gears from song to song. At times lamenting ballad, other times folksy ramble, and yet some tunes are full out psychedelic rave-ups. I have become obsessed with this album. Naturally, I thought that they had a really bright future ahead of them considering this is their first full length. At a triumphant tour closing show less than a month after the official American release of the album in their native Australia, they announce from the stage that it will be the last show The Middle East will ever play! Noooooooo. Seriously, I was just getting into these guys. Here is the official statement from them:

writing to inform you that we’re ceasing. i’m not sure if we’ll make more music later on or not. we don’t feel like playing anymore for a whole lot of reasons that i won’t list here and i’m afraid if we continued any longer it would just be a moneygrab. i’d rather go hungry. thank you to all those who came to shows. we had fun. t.s elliot wrote ‘you are the music while the music lasts’, but he also wrote that confusing little book about cats so don’t put too much stock in his
quotes. i’m very tired. until next time.

Wow, total bummer. Needless to say, countless attempts at a First/Last participation has been met with resounding silence. Ah, who cares, I still love this disc. I probably listen to Hunger Song once a day. Just so good.

Ethan and Barbara Gruska are brother and sister. Their harmonies on this debut album are what keeps me returning to these songs. Sunny, slick, L.A, pop at it’s best. I actually previously ‘met’ Barbara briefly when she was drumming in Jenny Lewis’ band in ’09. By ‘met’ I mean I maybe said hello. You think I would have an ‘in’ for getting them for a First/Last? You would think.

When this album first came out in Spring, I contacted the management for an interview. Two months later, out of the blue I got a cryptic confirmation they would do it. After that I heard nothing till the end of summer when a totally different rep said, sure, they would participate. Another several months go by when yet a different rep asked me my stat counts on the blog? I sent them a few weeks ago with again, no response. Finally, I was told maybe in the new year.

So let’s see, it’s been eight months, five different people, a dozen emails back and forth and still nothing. Hey, here’s a secret, I am trying to get your band some exposure they wouldn’t have had otherwise. It’s not like they are Coldplay? Seriously? Believe me, I am not upset or anything, just kind of perplexed. Either they are total prima donnas (which I doubt) or they have horrible PR.

Regardless, I wish they would have played along and I am kind of thinking they will do so in the coming months. Until then, if you haven’t heard their stuff, do check them out. It is a terrific collection of songs.

UPDATE: Here’s a cool little message posted by the band on their Facebook:

“Hey Hugh! Haven’t heard about about until just reading your post, look forward to talking in the new year then. Sorry about the confusion!”

I listened to this wildly, wonderfully weird record a ton over the last year. I was way too psyched when they booked a show at Garfield Artworks in February. I haven’t been this excited to see a band in a very long time. I get to the venue and openers Ursa Major are setting up and I was wondering if the guys were downstairs or what? Turns out after about twenty minutes, Manny answers the phone and explains to the few people there that F&G are on their way! Oh, O.k….well, where exactly are they? On the turnpike outside Somerset! Let’s see, it’s 8:30 now, by the time they get here set up and start playing it will be close to 11:30-ish maybe midnight. I only have to get up at 5 A.M….Bummer. I begrudgingly bail. Thinking they might possibly schedule another Pittsburgh date as they tour the hell out of promoting this album, right? They do play Pittsburgh again. A few months later at Ursa Major’s Doo Wop mansion. Too bad I didn’t find out about it until that day and couldn’t swing it! Unbelievable. Oh well, someday I’ll get to see them, I think? Until then I do have the kick ass album to listen to. Here’s a fun First/Last from Jason and Andrew from back in February.

Andrew: I tend to like cities with rivers. Jason added, “Sorry, I wrote the answers while drunk, I hope they don’t think I am being an asshole. Ha ha”. Thanks Hugh!!!

Tristen Gasparadek is in her late twenties but sounds years more mature on this, her full length debut. She released a raw, self recorded CD a few years ago but with this album, her music is full of a new confidence and unmistakably beautiful vocal harmonies not found on the first collection of songs.

My recollection of seeing her play in the Spring was the fact that I thought was privy to something undiscovered and special, until unknown to me, two other local music bloggers were crazy too see her as well, and she wasn’t even headlining the night!

She is celebrating the season (and a new haircut) with offering up her new yuletide EP here in exchange for your email addy. She was cool enough to take some time recently to participate in this year end edition of First/Last.

Thanks so much Tristen. Really cannot wait to see you play Pittsburgh again.