Anthony Heubel and the High Lonesome Band join up to bring folk/Americana vibes with a slight country twist. The Pittsburgh, PA based group consists of Anthony Heubel and Zach Bronder on guitar and vocals, Pat Coyle on drums, vocals and percussion, Nate Campisi on bass, Greg Decarolis on keys, piano, organ and bass, Read Connolly on pedal steel and dobro and Richie Colosimo on trumpet. The group together released their self-titled album on April 24, 2020 through Wild Kindness Records. The album provides a 10 track set solely written by Anthony Heubel. The album was recorded by Campisi at a camp in the Allegheny National Forest. Heubel wrote this personal album based off of experiences he has endured. The listener is taken on a journey of ups and downs along with him as he reflects.

The beginning track entitled “A Good Ending” starts off with an instant catchy heavy acoustic guitar and overlaying sound to get you moving. You may find yourself tapping your foot along to the beat. Heubel reminisces on nights with friends and the never ending life story they are creating. The next track “Gutter” leads off on a more solemn note of hardships and leads to a climax of finding one’s place and continuing forward. In “Desert Islander” one instrument is added at a time to create an undeniable folk rhythm. The instrumental sections dominate this track as I found myself being taken away with the melody. The intro to “Beg or Borrow” is accompanied by a whistle tone adding yet another level to the arrangement. The track gives off more of a stripped down feel with the accompaniment of acoustic guitar throughout the piece. “Avalanche” shows off Heubel’s vocal range with words of thoughts and feelings holding him down yet trying to find a reason to hold on to hope. In “Ode To Jesse” the stripped down arrangement allows the vocals to truly shine. Heubel’s vocals allow a pure and honest approach drawing one into the story of loss and separation. The seventh track on the album “Real love” explains how there may be bumps but there will always be love. This song I found as the most relatable as relationships take work but together can conquer all. “Spitting Image” turns from indie to rock vibes halfway through. The ending feels like a celebration with the trumpet becoming prominent. The ninth track “Sad Old Moon” layers vocals for emphasis. The track feels mystical and wholesome as it stands out against the others on the album. I can imagine this live as the lights go low and the crowd sway along in awe. “This Same Old Way” closes the album with an inviting melody and thought grabbing lyrics as Heubel sings “No one should have to get used to living like nothings gonna change”.

The storytelling qualities of Anthony Heubel and the High Lonesome band along with their musical talent has brought about an incredible piece of work. The full album is available to listen on Bandcamp.

“Anthony Heubel takes care of a cemetery in the daytime and writes songs at night. Sometimes accompanied by a band and sometimes alone, he makes music that meets somewhere at the intersection of Folk, Country, and Americana.”

Anthony Heubel is a Pittsburgh based musician who will be releasing his first eponymous solo album on cassette in the upcoming weeks. Having been around the local scene in bands Run Forever and Cotopaxi, Anthony is readying the release by putting together a full band to debut his songs this Friday (1/19) at a local music showcase in Millvale. I want to thank Anthony for taking the time to participate in this edition of First/Last. 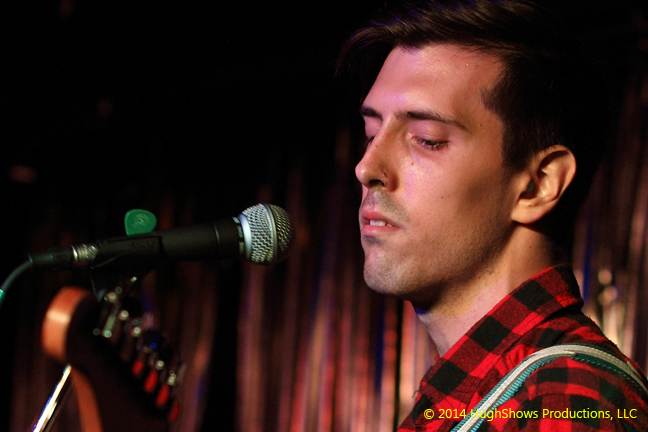 I think it was a four way split 7″called Dangerous Intersections. All four bands songs on the compilation are great but I bought it for the song “No Spark” by New Creases.

Hmm, it was either Conor Oberst’s Salutations or an Eric Andersen record. Jerry’s in Squirrel Hill is my go to spot for all the good older stuff.

Probably In My Own Time by Karen Dalton. All of the songs on it are traditional songs but her voice is just so amazing and heart breaking. Definitely worth checking out. I look for her records everywhere I go and I’ve only found one repress in a book store in
Texas that I bought immediately.

I’m not sure on this one. I’m really bad at keeping up with current releases so I can’t think of anything I’ve been let down by recently. What usually happens is a band I like puts out a record and I think it’s awful the first time I hear it and then a week later Irealize that it’s amazing and it becomes my new favorite.

Godsmack at the Erie Civic Center with my Mom when I was maybe 12. We thought the opener that played was Godsmack so when they finished we left. I didn’t realize what had happened until a little later when I started going to local shows and saw the way it worked. No regrets.

I just saw my friends in Soft Gondola play a few days ago. All of the members are in some of my favorite Pittsburgh bands and Soft Gondola just released a tape called Where I Go that’s excellent.

One time I saw AA Bondy, Deep Sea Diver, and Conor Oberst and The Mystic Valley Band, probably around 2009/2010. It was my first time seeing all of them and I was blown away the entire time.

Godsmack. Or this one crazy show I played in Colorado once on New Year’s Eve. The doorknob broke and we got locked in our hotel room right before we had to play and then while we were playing a drunk guy started being real sketchy to some people in the crowd and this big fight broke out. We ended up rushing off the stage with all of our instruments feeding back to help break things up. Then we had to get back on stage and play like nothing happened, it was horrible.

Things have changed so much since I moved here in 2008. I remember playing the first show ever at 222 Ormsby in Mount Oliver with my friend Roger Harvey. It was his album release and there was no PA and people just partying everywhere. No one really knew what to do with themselves yet because the space was so new. Meanwhile we were trying to play soft folk music on acoustic guitars while five or six people were huddled around us in a circle. Roger sold out of all of his records that night though and Ormsby went on to be one of the best venues around for a long time. I’m so proud of the music community here and everyone that books shows and are constantly searching for new venues or opening up
their homes to bands. I was just at Babyland for the first time (way too late to the party) and I couldn’t believe that I hadn’t been there sooner. The sheer scale of it is impressive, and all of the artists there are so talented. Even after almost ten years there are so many parts of the city that I’m still finding out about and so much new stuff happening all the time.

Thanks, Anthony. I am still regretting that I never saw a show at 222 Ormsby. Believe me, I had plenty of invites and opportunities to go but weirdly, something was always preventing me from going and now I wish I hit the place up at least once.