“Gave blood and bone to what they bumping in the underworld and summer homes.“

Back Alley Sound is a riff-hop six-piece band hailing from the South Side of Pittsburgh. With Shark Parker as lead vocalist, the guitarist Myles Mahoney along with the keyboardist Christian Petrozza, the bassist, Sam Kisic, the saxophonist Robert Ruffner, and finally the drummer, JAYB$, round out the sextet of instrumentalists that create the live experience that is Back Alley Sound. The band’s debut full-length entitled I Wanted to Be was released earlier this year and this Sunday, April 11 at 8pm, they will perform the album all the way through live on a special stream of Sikes fantastic podcast Start the Beat. I want to thank Myles and Sam for taking the time to participate in this edition First/Last.

The first album you ever bought?
Myles Mahoney: Not sure about which one I purchased but I remember my parents giving me a collection of Motown and funk cassettes. That had a huge impact on my taste in music early on.

Favorite album of all time?
Sam: As a fan of multiple types of music, from Charles Mingus to Snarky Puppy to RHCP and the Mars Volta, choosing a favorite album is an impossibility. However, relating to Back Alley Sound and in a contemporary setting, Swimming by Mac Miller probably takes the cake. I’ve been listening to Mac since K.I.D.S like many of us in Pittsburgh have, and Swimming revealed a culmination of years of hard work, putting on display a new level of lyricism and musical maturity unrivaled up to his unfortunate passing. Coming from where he started to working with John Mayer and Thundercat is remarkable and inspiring. I think I speak for all of Back Alley Sound when I say we miss and love Mac. He has changed music, and our lives. Mac Miller lives on as a testament to determination and manifests in the hearts and minds of millions every day in the most positive way. I’m a lifelong fan, and I’d say Swimming is my favorite album of all time.

Least favorite/most disappointing album?
Myles: Honestly, I couldn’t tell you. Music taste change as time goes on. Even if I don’t like a record initially, I’ll find something I like about it over time.

First concert attended?
Myles: I remember going to Hartwood Acres to see shows as a kid. I think the first show I went to on my own was Rise Against and Comeback Kid at Club Zoo. I remember seeing the bands energy and I knew that that’s what I wanted to do.

Last concert?
Myles: Some bandmates and I backed up Shawna Roxanne for Pittsburgh’s Own. Two days later I went to see Allen Stone. Little did I know that by the end of the week everything would be shut down from Covid.

Favorite concert ever?
Myles: It’s so hard to pick just one. The most impactful was seeing Black Milk with the Nat Turner Band in the basement of Spirit. I’d just come off a long three month tour and our manager said we had to come with him to check out this hip hop artist. I was so tired I initially said I just wanted to stay in for the night. I’m so grateful I didn’t because the vibe was absolutely amazing. The band took Black Milk’s energy to a whole other level. I knew that I wanted to shift the style of music I was playing at the time.

Least favorite concert?
Myles: Without saying any names I ran a show at one of the larger local venues. Just about anything that could of gone wrong did. Needless to say, it was stressful.

Favorite thoughts, experiences about Pittsburgh?
Sam: Pittsburgh is a major American city, but at <400,000 people each niche be it the arts, sports, clothing, food becomes special to those involved. The arts have blossomed into something spectacular over the course of the last several years and the camaraderie between artists is stronger than ever. The concentration of creativity in a city this size is remarkable. Some of my favorite bands, visual artists, photographers, videographers, graphic designers, and other artists reside in Pittsburgh and many of them, as a member of Back Alley Sound, have become my friends through the numerous events I have participated in as well as attended on my own. Past music, I have developed relationships with staff the restaurants, bars, and other establishments I frequent. In a small city, things become more personal, and Pittsburgh is no exception.

Thanks, fellas. Definitely gonna tune in on Sunday. I am such a huge fan of Start the Beat! 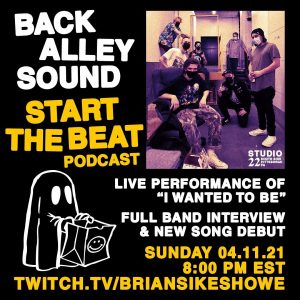