“Jesse Hall left the city he loves and a promising pop-punk band to follow a girl to Austin. All he got was a broken heart, a long trip back and the seed for one of the best albums to come out of Pittsburgh in 2010.” Pieces of the debut record from Bear Cub were written on that 2,000-mile car trip back home and, in indie-folk/Americana style, it chronicles the singer-songwriter’s ill-fated romantic venture south…“

The now Nashville-based band return ‘home’ to Pittsburgh tomorrow night to celebrate the release of their latest record, “Good Morning, Every Morning”, at The Rex with local faves New Shouts and Gypsy & His Band of Ghosts along for the ride. Fun times for sure! My sincere thanks to songwriter Jesse Hall for participating in this edition of First/Last. 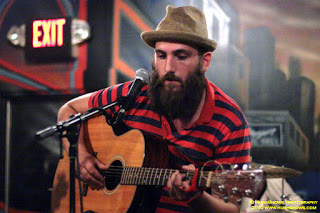 Thanks, Jesse. Pittsburgh loves ya back bro. I love it that you came back here for your release gig!

This was my first time seeing the band. I was so late to the party that this was their hometown farewell show and as they are moving to Nashville, it might very well be my last. I hung back and enjoyed the set due to exhaustion from a long night that I will detail later. In the meantime, enjoy some soundcheck shots and join me in wishing the band well on their new adventures!