“Dylan Rau started Bear Hands to spite a romantic rival. In disconnecting himself from the love triangle (and successfully copulating with several other humans) he was able to write about 70 new and exciting songs. Joining forces with fellow Wesleyan university alumnus Ted Feldman and iconoclast punk veterans Val Loper and TJ Orscher the band started to stomp live. Both other bands and people in the crowd were stomped regularly and definitively. Touring became a new way of life for Bear Hands after the 2007 release of their Golden EP. The band opened for MGMT, Vampire Weekend, The XX, Les Savy Fav and spent time on roads all over North America and Europe with now-dear friends Passion Pit, Obits, We Were Promised Jet Packs, Hockey, Manic Street Preachers, and Mayer Hawthorne and The County.”

The band return to Pittsburgh Saturday night at Brillobox with support from Fort Lean and local favs Satin Gum. My thanks to Val Loper (Bass) for taking the time participate in this edition of First/Last. 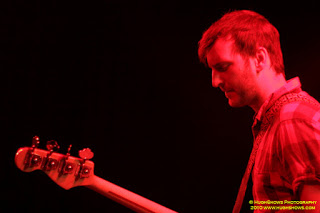 Thanks, Val. Getting knocked out at a show seems like a major buzzkill.

These guys opened for We Were Promised Jetpacks.