“When I was twenty-three I had a waking vision of a creature trying to get inside my apartment. At the time I couldn’t tell if it was malevolent and bent on my destruction since it would not speak but only scrabbled at the windows and beat on the walls. Whatever it was, it had wings and was terrifying. All night I piled furniture in front of the door to keep it from getting in, which seemed to work. I should mention that I also had a fever and was taking exotic narcotics to deal with it. The upshot of this episode was that I dropped out of school and began to write songs, to play music. This was not music that ever traveled, at least not for many years (my lower-class, small town upbringing ensured I had absolutely no ambition), but it was music that permeated everything. My friends and I lived together, made recordings, played occasional shows and mostly just worked out our demons through narcotic substances and song.”

The band returns to Pittsburgh tomorrow at Mr. Smalls with special guest Sarah Jaffe. My thanks to Marty Marquis (Guitar/Keyboards/Vocals/Melodica) for taking the time to participate in this edition of First/Last. 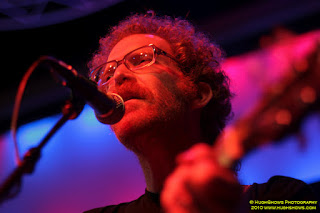 Thanks Marty. The venue was Diesel which has since stopped putting on rock shows, thankfully.

I was amazed that there were so many people at this show. I consider myself a fairly knowledgeable guy when it comes to under the radar indie bands. I have heard of this band but would never have guessed that so many other people would have also. It wasn’t crazy packed, which made for an easier time bopping around Diesel for some different angles. Always a bonus. A proper mini review here and a preview from the new kids on the Pittsburgh music scene here. Welcome fellas!