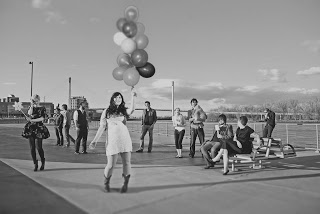 Photo courtesy Eric Gonzalez Alfaro
Bluebird
Howler’s Coyote Cafe
Wednesday, July 11, 2012
Bloomfield
“From the hotbed of the Omaha music scene comes Blue Bird’s
self-titled full-length record. The album is a follow-up to 2011’s
Metamorphosis EP. Blue Bird is the creation of singer-songwriter Marta Fiedler
and, for this record, she enlisted the help of fellow Omaha musicians, such as
Jake Bellows (Neva Dinova), Carrie Mardock (Eagle*Seagull), and Mike Overfield
(Conduits). The record was recorded and mixed by A.J. Mogis at ARC Studios in
fall 2011.
Blue Bird’s debut is an
eclectic mix of songs influenced by folk, Americana, soul, and French dream-pop
and immediately draws comparisons to other female-fronted indie-rock acts suck
as Jenny Lewis, She and Him, and Feist. Fiedler has been compared to these
artists as well as classic singers, such as Linda Ronstadt. The songs feature
Fiedler’s songbird voice backed-up by soaring harmonies and intimate and
intricate instrumentation.”
The band stops in Pittsburgh tonight at Howler’s on a bill with Paul Jay, These Lions and Sinnet. My thanks to members Marta Fiedler (Vocals), Vince Giambattista (Guitar), and Rob Mathews (Drums) for participating in this edition of First/Last.
The first album you ever bought?
Marta Fiedler: Tori Amos, “Under the Pink”.
Vince Giambattista: Megadeth, “Peace Sells”.
Rob Mathews: Maybe Ratt, “Out of the Cellar”?
Your last album bought?
Marta: Probably a local Omaha band.
Vince: Prince, “Sign ‘O’ the Times” at Goodwill on compact disc.
Rob: The Head & the Heart, “S/T”.
Favorite album of all time?
Marta: Neutral Milk Hotel, “In the Aeroplane over the Sea”.
Vince: God Lives Underwater, “Empty”.
Rob: The Beatles, “Abbey Road”.
Least favorite/most disappointing
album?
Marta: Post-“Pinkerton” Weezer.
Vince: “Danzig 4”.
Rob: I generally don’t remember albums I don’t like.
First concert attended?
Marta: The Grateful Dead.
Vince: Aerosmith/Dokken in ’87.
Rob: Kiss in ’79…I was a young ‘un.
Last concert?
Marta: Probably a local Omaha band.
Vince: Ryan Adams.
Rob: Ryan Adams solo in Kansas City, MO. I went with Vince!
Favorite concert ever?
Marta: Sigur Ros.
Vince: Pearl Jam, 1992 in a small club of 300 people.
Rob: Probably too many to count, but last time I saw My Morning Jacket they
killed it.
Least favorite concert?
Marta: I was probably too intoxicated to remember.
Vince: Rob Halford’s Fight in 1998…I was bored after 2 minutes.
Rob: I went to see Marilyn Manson in his heyday in the 90’s just to see what
all the hype was about. I was bored as hell.
Any thoughts,
experiences about Pittsburgh?
Marta: First-timer.
Vince: Last time I remember being in Pittsburgh, I was guitar teching for a
band at the Hard Rock Cafe and I met Zakk Wylde’s guitar tech who was also in
the movie Rockstar.
Rob: It will be my first time in Pittsburgh but I used to know this dude, Bud
from Pittsburgh, that would come through Omaha in the mid 90’s with his punk
band. Can’t remember the name of his band for the life of me right now but
Bud was a nice guy. For me, he represents the entire city until I get
there!
Thanks, guys. Bud from Pittsburgh, eh? Hey Bud, if you’re out there, you be reppin’ the ‘Burgh, dude!