“Crushed Out is an explosive hit of surf-garage momentum and rock & roll from Brooklyn, NY consisting of Frank Hoier on guitar and vocals and Moselle Spiller on drums. After four national tours and a well-received EP, 2010’s Show Pony, the couple, formerly known as Boom Chick, are set to release their debut full-length, Want To Give, on Nov. 6, 2012 on their own Cool Clear Water imprint. Want to Give is a pure guitar/drum adrenalin rush – plenty of fuzz, tremolo, riffs, chunky chords, slide and Black Sabbath power chords. The songs are tight and lean; no fat, no studio fairy dust. Recorded both at Brooklyn’s Bunker Studio as well as at Crushed Out’s own analog studio in a rural New Hampshire barn, the tracks were all self-produced and mixed by John Davis.”

The duo returns to Pittsburgh at GarArt this upcoming Saturday on a bill with The Hounds Below, White Like Fire and New Vegas. My thanks to Frank Hoier (Vocals, Guitars) and Moselle Spillar (Drums) for participating in this edition of First/Last. 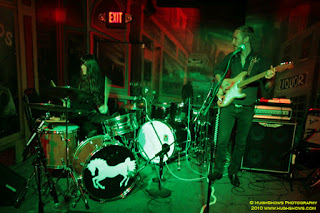 Thanks, guys. Hey Moselle, I think I found your keys…

This Brooklyn based duo was sandwiched between a few local acts and were stunned at the energetic reception they got. Hey, a Friday night in Lawrenceville almost certainly gets a good response no matter who you are nowadays. Not taking anything away from them at all. They were surprisingly enjoyable, bashing through their ‘garage blues’ set as best they could being a two-piece and all.