“The best songs of North Carolina’s Bowerbirds have always seemed eternal. Coruscated by Beth Tacular’s bird song and Phil Moore’s environmentalist empathy, “In Our Talons” (off Bowerbirds’ Hymns for a Dark Horse) was, at its core, a quest for solidarity in a world of closing shadows. Upper Air’s “Northern Lights” painted a pained portrait of love shrouded in doubt as perfectly as Cash, Dylan or Cohen ever have. These felt like more than songs; they felt like treasures. The Clearing is the third album by the Bowerbirds, and as is often the case for bands that have found steady success, they had more time and better resources to make it. This is a bigger record, with bolder sounds, a broader scope, and more complicated songs. “Tuck the Darkness In,” for example, surges in its final two minutes with a wall of electric guitars and drums, while other tracks feature restless vibraphones, pianos and drums. Thing is, these songs don’t cede to the increased production demands. The guitars and strings, codas and bridges simply make these thoughts more urgent, more vital and more necessary, but not one bit less permanent.”

The band headlines Smalls This Wednesday with a solo set from Basia Bulat to open the show. As mentioned previously, I am really jazzed for this gig. My thanks to Phil and Beth for participating in this edition of First/Last.

Thanks, guys. Can’t wait to finally see you play again.

Bowerbirds are coming to Pittsburgh next month. Hard to believe it’s been five years since I saw them last. The band are super nice and talented and this is one show I am really looking forward to. 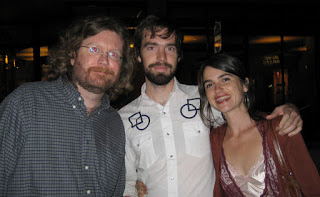