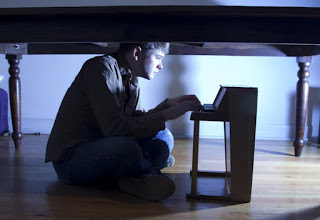 “Kelly Pratt is Bright Moments. He’s the guy up at night by himself, stitching songs together in his
New York City apartment all winter. There’s a special art to making an
album in the spare seconds that the rest of a regular life can’t quite
reach. Recorded track-by-track-by-track with Pratt on most of the
instruments in his apartment studio during the New York City winter of
2010, this slow-motion musicianship became Natives (Luaka Bop).”

Kelly brings his Bright Moments to Smalls this Saturday opening for Jukebox The Ghost. With Savoir Adore on the bill, this is should be a great night. My gratitiude to Kelly for participating in this edition of First/Last.

The first album you ever bought?
The first album I remember having is “Thriller”. I think I was probably more
fascinated with the video than the music, but that has definitely changed over
the years.
Your last album bought?
Probably the new Beach House album.
Favorite album of all time?
I try to answer this a different way every time, since I have so many
favorites. So today I will go with Miles Davis/Gil Evans’ “Sketches of
Spain.” A masterpiece for both musicians, and a record that only gets
better on subsequent listens.
Least favorite/most disappointing
album?
Probably some modern country album. But let’s just say it’s a tie for the last
five U2 records.
First concert attended?
I attended dozens of band and orchestra concerts as a kid. But the first big
rock show I saw was the Eagles on the “Hell Freezes Over” Tour.
Last concert?
We just played a show the other day at Mercury Lounge with two great bands,
Jinja Safari and Landlady. It’s really great to share a bill with other bands
you enjoy.
Favorite concert ever?
I saw Dolly Parton last summer. I probably couldn’t say it was my favorite
concert ever, but it was up there. She sounded incredible. She sang several
songs a cappella and several with just her accompanying herself on autoharp.
Some people are famous for the wrong reason, but not Dolly.
Least favorite concert?
Another tough one. There have been many disappointments over the years. But
it’s funny that it’s way harder to think of really bad shows/albums than good
ones. Let’s go with Paul McCartney at Coachella in 2009.
Any thoughts, experiences about
Pittsburgh?
I haven’t spent too much time in Pittsburgh. Last time I was there I went to
the Warhol Museum and was late to soundcheck because I couldn’t pull myself
away. The times I’ve been there have been very nice though!

Thanks, Kelly. My first show was The Eagles too, only 15 years earlier. My dad made me leave during “All Night Long”.