This show was probably the most emotionally uplifting concert I have ever been to. With the obvious elephant in the room whisked away early and quickly as Mr. Campbell started RIPPING leads on his guitar, you could practically hear a collective sigh of relief from the crowd. Sure there were a couple of bum notes here and there but overall, the man proved what a legend he is. This show will definitely be on a bunch of local year-ends come December, mine included. Another review here. 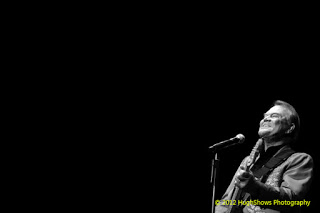 The last time I saw them play was in 2002 at Farm Aid. They were on way early in thd day a round noon, right before Drive By Truckers. They also played the Lecture Hall in Oakland in 2004 I am told. This was the perfect venue for them. What amazed me was that the first three front row center seats were empty during the night. I found out that a buddy checked ticketmaster that day and saw those very same seats available but passed for financial reasons. Crazy that they were never gobbled up by anyone?.

Chalk this show up to another one where the opening band is more enjoyable than the headliner, in this case, Broken Social Scene. The Wooden Birds weren’t Earth shattering or anything, just solid indie pop that was a total surprise to me. It was cool recognizing Matt Pond as he came onstage and approaching him afterward he was really nice, as was the rest of the band. I really loved this set. More PGH fanboy love here.

As support for Emmylou Harris, the band got a rare standing ovation for an opener. It was totally well deserved as they played a bunch of stuff from their upcoming release which sounded amazing. I was blown away of how good they were. Can’t wait till they come back in February as they announced from the stage. It was also cool to see Emmylou enjoying the set from the wings. More photos here.

It’s amazes me how many great shows I have seen this year. Among the top of the list is this one. I have seen him before but was floored of how good he and his band sounded. He played his entire new album straight through and then a set of ‘hits’. Usually I would be a little weary of such a show but his new stuff sounded just as great as the old. I am so glad I saw this show. As Rosemary stated in her introduction, she was jealous of the first timers in the audience who never saw him before. Well put. More photos here.

On assignment for WYEP. I really don’t know much about Citizen Cope except that from first impressions, dude seems chill. I was surprised how many people were actually there. Wasn’t he always playing Club Cafe when he came to town? In actuality, I am glad his following is growing, he and his band sounded great. He also had some signed framed posters for sale at $100 a pop! Here’s a tip, wait after the show by his bus and get it for free. More photos here.

I have to admit, I was disappointed in this show. Their latest album is a top ten contender for me and my expectations were maybe too high for that reason. Several things marred this performance for me, first and foremost is that the band just didn’t seem to be into it, despite the fact that Kevin came out and announced that he and Brendan were celebrating recent birthdays. Could they have been hung over? Last time they played here, Brendan was jumping all over the stage. This night he was a zombie. Four songs in, Lisa Lobsinger came out and sucked whatever minuscule life was left in the room to bring the performance to a dead stop. The other off thing was the room. I love the Byham. I just don’t think it’s suited for a rock show. Some people want to dance, some want to sit. This isn’t the venue to accommodate for both. Maybe I am a bit too harsh but I was hoping for a stellar show and did not get one by a long shot. They were good, not great. More photos here.