Arriving early as I usually do, I found Julianna already set up and sitting by herself. She was very nice and among other topics, we talked about the media’s perceptions of her and her music and how she herself perceives it. It’s always cool to find out from the musician themselves different aspects of the industry that they ultimately really can’t control. She then played to a full and attentive room. By ‘room’ I mean a cafeteria that turned out wasn’t the awful space it seemed to be before she began. Very cool little set to see. 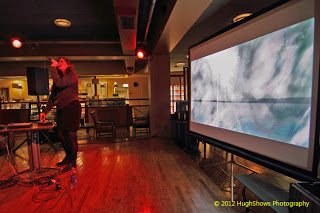 TPC are an indie/garage/pop band from Ontario who are playing Pittsburgh tomorrow at CMU with local openers 1,2,3. These college concerts always bring in the coolest bands and should be a blast. The band’s keyboardist Graham Wright was nice enough to take a few minutes to participate in this edition of First/Last.

Our Lady Peace’s 1997 breakthrough Clumsy. It was love at first sight after I broke a potted plant at my Grandma’s house dancing along to the video for Automatic Flowers. OLP isn’t exactly hip these days, but I still go back to this record every once in a while and it stands up!

A collection of songs by the 16th century composer Orlando Gibbons. I heard a beautiful instrumental arrangement of one of his more famous works, ‘This Is The Record of John’, and I wanted to hear it in it’s original choral glory. I’ve never really listened to choral music before, and especially not in English, so it’s really interesting to hear what they’re singing about! A lot of the lyrics are about God, of course, but the last piece on the record iscalled The Cries of London and it features a surprising amount of singing about various foods. Fantastic stuff.

Kid A, by Radiohead. Everyone has a record that changed their life and really changed the way they think about music, and Kid A was that for me, so it kind of set the standard by which I judge everything else I listen to.

I tell people the first show I saw was Radiohead, but it was actually the Christian group DC Talk on a church field trip when I was 8 or 9. I was tasked with writing a review of the show for the church newsletter, which to this day stands as my sole contribution to the annals of rock writing.

The CD release show for my friends Will Currie & The Country French. They’re an amazing Toronto band whose new album, Awake You Sleepers, is really exciting and ambitious. It’s really orchestrated, so for this show they pulled out all the stops and had a string section and horns. It was in this beautiful old church in Toronto that doubles as a venue and was a pretty damn good show.

Like my favourite album, the first proper concert I saw was Radiohead, and it set the bar pretty unreachably high. But I recently caught Jeff Mangum, of Neutral Milk Hotel fame, and that was one of the more intense experiences of my life. I’m one of the people who got into NMH after they’d already stopped making music, and so my entire fandom was spent assuming I’d missed the boat on seeing them live. Getting to hear those songs live was pretty insane.

Probably some random local opener who I’ve forgotten about, but the worst ‘big’ show was probably a Broken Social Scene show in Toronto maybe 6 or 7 years ago. I should preface this by saying that I love BSS and I’ve seen several shows of theirs that were magical and fantastic, but at this particular show they indulged all they worst tendencies. It was rambling, preachy, way too long, and way too loud. A real bummer, since the last time I’d seen them I was blown away. Also I think I was having a fight with my girlfriend or something, so that probably didn’t help…

I like Pittsburgh a lot! I appreciate your devotion to hockey, your sandwiches with fries on them, and your generally awesome audiences, just to name a few things. We found some incredible donut place last time we were there, too, which I look forward to patronizing.

Thanks Graham. Should be a fun time tomorrow. BTW-Pittsburgh and donuts? That’s a first!

This is a relatively new band on the local scene. They have been playing out to some high praise lately and have a gig coming up at Brillobox on April 2nd. Discovering new Pittsburgh bands people…that’s what it’s all about!

So the word spread rather quickly Friday that this show was taking place in two days. The university’s AB Board has been dormant, so it came as a surprise to me and many others that this show was even happening at all. I am not that familiar with the band but I did like their last release enough to check them out. The sparse crowd of 100 or so were treated to a fantastic set. They were sounding awesome in the ‘hall’ and kudos go out to the techs who know how to mix and light a band in that room. I also have to say again how much I appreciate the fellas who hook me up for these shows. Thank you guys.

I never heard of this band before they were announced as an opener. They were pretty solid given I wasn’t familiar with their music at all. Extremely humble and cool dudes even though they hail from Philly…BOOO! As with last year, I have to give a huge shout out to my man Warren who hooked me up with the pass. Thanks, buddy!