“Born & raised in the South Hills of Pittsburgh, PA, Adam fell in love with music singing along to radio tunes and Mickey Mouse singalong tapes. Years later, after cultivating that musical interest into a passion for performance through choral music and musical theatre, he began playing shows around Pittsburgh as the bassist for a pop-punk band in high school. Afterwards, while living in Durham, NC and travelling the Triangle open mic circuit, Adam’s music started to shift directions towards a more traditional, singer-songwriter vibe, which continued after moving back to Pittsburgh in 2009. He continued to refine the combination of heartfelt melodies & lyrics with energy & intensity from the pop-punk/rock music phase, and this became a signature style that evokes a blend of Bright Eyes meets Weezer. Adam’s debut album, Shapes & Shadows, is being released under the name Circles & Squares, which has evolved from a simple song title to a 6-piece indie-rock band that brings the emotion written into the lines of the music to life.”

Check out the band at their official Website and on Facebook. They perform live this Friday at the Altar Bar as they open for Ben Sollee. My thanks to Adam Levine (Guitar/Vocals) for taking the time to participate in this edition of First/Last. 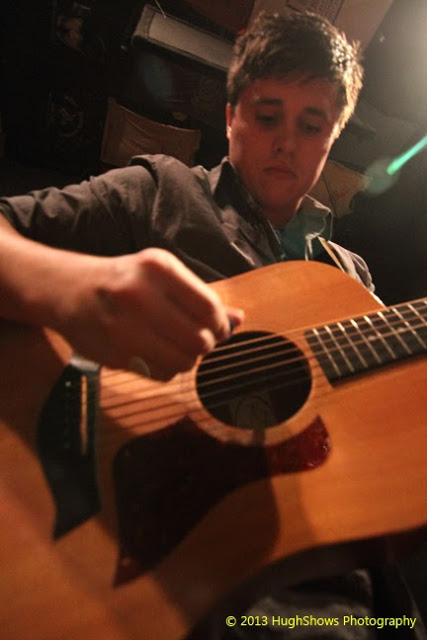 “All the Pain Money Can Buy” by Fastball, which is actually still one of my favorites, although it might be a nostalgic thing. I am confident that I probably know every word to every song on that album. I got it during the summer that ‘The Way’ was monopolizing the Clear Channel airways, but the album actually has a bunch of solid guitar pop songs, and I think the frequent use of vocal harmony between Miles & Tony really shaped my own songwriting tendencies… I can recall 9-year-old me being fascinated with singing along to the harmony rather than the melody, which is something I tend to do even to this day. ‘Which Way to the Top’ is still one of my favorite songs.

Local musician Brad Bendis’ self-titled EP; he and his band are definitely worth checking out. Actually the last few I’ve acquired have been almost exclusively local musicians’ records – Andre Costello & the Cool Minors, The Wheals, and Western Pennsylvania among them.

That is a really difficult question for me to answer. The list constantly rearranges in my mind and varies based on my mood I think. Is it too cliché to say “Dark Side of the Moon”? I’m a huge fan of albums as a collective work of art, not just a collection of individual songs, and I don’t know if anything epitomizes that philosophy more than the way those songs all flow together. I might get crucified for putting these two bands in the same paragraph but another favorite of mine is Coldplay’s “X&Y”. In fact, I’ll just fill out my potential momentary top 5: Weezer’s “Blue Album”, Jose Gonzalez’ “In Our Nature”, and Minus the Bear’s “Menos el Oso” are all up there as well. Also “Planet of Ice” from them. And while we’re at it, “Illinois” by Sufjan Stevens and Nick Drake’s “Pink Moon” have probably seen their time at the top of my favorites too. Its better that I just stop thinking about this question because I could sit here all day and keep adding to the list.

The album I was most disappointed by was actually something that should not have surprised me as much as it did… one of my all-time favorite bands is Red Hot Chili Peppers, and “I’m With You” was just a confirmation that they could not possibly be the same without Frusciante. Josh Klinghoffer definitely brings his own style to the album but as someone who grew up jamming to ‘Give it Away’ and ‘Otherside’, and remembering how blown away I was by his playing when I first saw the “Live at Slane Castle” DVD (that guitar solo on ‘Parallel Universe’? out of this world) it was just not the same without him.

Green Day featuring an opening set by My Chemical Romance at Mellon Arena… 10th grade me thought it was the greatest thing of all time.

Brad Bendis’ EP release show in South Side… was an awesome & polished performance with quite a few pleasant surprises, including a ‘St. James Infirmary Blues/Layla’ mashup that really rocked.

Without a doubt Paul McCartney’s performance at Bonnaroo last spring. The man played for like 3.5 hours (played two separate encore sets) and absolutely rocked the place to its foundation. I had crazy flashbacks just a few days ago when we were sitting around and ‘Live and Let Die’ came on the radio. The whole show was just energy-packed and obviously with such a storied songwriting history, it was full of great music. But more than that it was wonderfully performed music. Sir Paul and his band were in incredible form and even though I can’t imagine how he could possibly not be jaded at this stage in his career, it seemed like he was playing all the songs for the first time ever with the passion he put into them.

I don’t know if I have a least favorite concert that I attended; I certainly don’t feel entitled to judge anyone who is willing to get up on stage and put on a show… but there are quite a few of my own that I wish I could go back and rework, for sure.

Pittsburgh is an enigma to me. I’m incredibly proud to be from a city with such a rich and diverse past. We’re known for our steel-industry forged blue-collar values as well as our sports franchises, but at the same time renowned for education & scientific/medical research and have a great artistic and musical history that I think sometimes gets forgotten. Just about anyone you talk to would know Duke Ellington, but how many people do you talk to that would recognize the name Billy Strayhorn? People know about Gene Kelly and Andy Warhol and Christina Aguilera, but how many people know Jeff Goldblum is from Homestead? Art Blakey and George Benson were born here. Lena Horne cut her teeth working with Strayhorn in Pittsburgh. Getting out of the jazz realm, Joe Grushecky, Gregg Gillis (Girl Talk), and Wayne Coyne are all from Pittsburgh.

Stephen Foster was born in Lawrenceville if I remember correctly. It’s always fascinating to me that we have born and/or bred so many accomplished musicians, artists, and performers but it always seems to be overshadowed by the “steel” aspect. It makes me really happy to see things happening like the 3 Hour Tour that Chet Vincent just took part in out on the Clipper, and the Deutschtown Music Festival that took place. That’s the kind of thing I’d love to see more of in our city – a celebration of our creative & artistic accomplishments. It doesn’t have to be confined to the Three Rivers Arts Festival (which is a great event in its own right). I don’t know about the rest of the world, but I know for myself, music keeps me standing and functioning just the same way that steel holds up the UPMC building or PPG Place. So it’s really exciting to see the paradigm shift that seems to be driven by local musicians and places like Cannon Coffee towards an emphasis on the arts in our town. There’s something in those three rivers that nurtures creativity, I’m sure of that… it’s about time we started celebrating it.

Thanks, Adam. Looking forward to hearing your new music, man. Also, how frustrating is it sharing the same name as yours with someone who is suddenly ‘famous’ now?