Jon Belan’s alter ego, Gene The Werewolf, is one of the city’s more popular rock bands playing. They have TWO big performances tonight. The early show is at Stage AE opening for The Clarks in celebration of the Steelers AFC Play-off game on Sunday. They also play later on at the Altar Bar in celebration of my friends at Drusky Entertainment’s 5th Year Anniversary.

They have also released a way cool updated version of the famous Pittsburgh Steelers Polka song. You can listen/download it here. Gene was nice enough to participate in this week’s special BLACK & GOLD edition of First/Last Friday.

Thanks Gene. Good luck on the shows tonight. Hopefully, we’ll all be celebrating Sunday night!

These guys pretty much are the definition of ‘rock stars’. They wear their confidence squarely on their sleeves and it comes out through the music. Again, relying on my brother’s opinion, he said they sounded like KISS. Not a bad comparison when you are being a rock star. 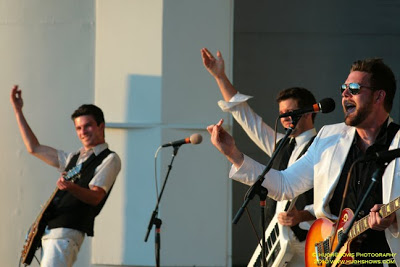