Grant Lee Buffalo’s 1994 second album “Mighty Joe Moon” is and will always be my favorite album of all time. I call it the album that saved my life. It’s impossible to convey the meaning it has for me so instead of trying, I won’t. The band put out two more records before it’s main songwriter Grant-Lee Phillips embarked on a solo career, releasing six wonderful and varied albums of his own. He is in the midst of finalizing his seventh solo release “Walking in the Green Corn” and according to Grant Lee himself, “…this one is a real grass roots effort being totally fueled by the dedication of my fans.” He is taking the PledgeMusic route and although he has met his goal, there is still time to contribute and receive some of the best incentives I have seen on these seemingly ever popular campaigns. Original prints from Grant Lee himself, house concerts, VIP packages, autographed posters and CD’s and lots more. Definitely check it out. I am genuinely thrilled that Grant Lee took a few minutes to participate in this edition of First/Last.

My first real sense of really falling in love with a record was probably “The Chilling Thrilling Sounds of the Haunted House”. One side was spooky stories and sound effects and the other side was just raw sound effects, loads of wind and horrifying groans. I played it to death, year round. The liner notes claimed that it was the most terrifying collection of sounds ever recorded. I believe it still holds that title.

I just downloaded the Beatle’s “Revolver” to listen to on my phone.

There’s no one album. At one point it would have been Bowie’s “Hunky Dory”, Neil Young’s “Harvest”, “Astral Weeks” by Van Morrison, Iggy Pop’s “The Idiot”, R.E.M.’s “Document”, “Daydream Nation” by Sonic Youth or “Doolittle” by Pixies. Why settle on one?

Can’t even remember it. Must have been horrible.

I saw Neil Young on the “Trans” tour in San Francisco. That one always stuck with me. Ya know, I’ve been working on a new album. It’s very acoustic, atmospheric, real intimate. A lot of the shows that I do these days are solo acoustic. I’ve realized that it’s a strength. Sometimes it hits me what an impression seeing Neil Young at age 19 was for me. The idea that you could build a show out of something so direct and simple. He’s the master of that.

Aimee Mann at The Wiltern Theatre in Los Angeles. Her Christmas show. It’s a tradition.

James Brown at The Beverly Theatre in LA about ’83. Nobody like James Brown, nobody since.

Probably my own the night I tore my Achilles three songs in. That was in 2010. It put a certain damper on things.

Pittsburgh is such a unique place. You’ve got this great old city with all of this history. It’s nestled in one of the most postcard perfect parts of the country, full of mountains, rivers. It has it all. There’s also a very progressive arts community in Pittsburgh and of course it’s the home of The Andy Warhol Museum, which I always hit when I come to town. And finally a stop by DeLucas on Penn for a big stack o’ pancakes.

Thanks so much Grant-Lee. Your music is such a huge part of my life. It means the world to me you played along. Hope to soon you soon buddy!

The first time I saw Grant Lee Buffalo was opening for The Smashing Pumpkins in 1996. Section D Row E means nothing to anybody when the hall is empty and I’m dancing like a fool. The band played six songs and that was it. Some stupid kid cuts the set short by tossing something onstage. Grant Lee gets mad, I miss out on a ‘Comes To Blows’ or ‘Happiness’ or any other possible tune. The band that changed my life was so far away in the arena that night but still Paul Kimble noticed me for a split second and he knew I was there for them. I will forever remember that hint of a glance from him to me for the rest of my life. How can’t I think that wasn’t one of the best sets I will ever see? The original trio I would never see play together again let me down in of all places Hershey, PA a year before when some stupid band called Radiohead opened for R.E.M. instead of them. Pre-internet thinking, I thought I knew what was up. I missed them by a day? Rolling Stone magazine sucked with that sour tour info. I will always hate Thom Yorke’s guts for that. ‘Fake Plastic Trees’ aside, that was the one and only time I had my dream band in front of me in Pittsburgh. The stuff that lives on in me and keeps me going to this day. Why do I try to hit every show in town? Why do I go early? Why do I get front row? Why am I show crazy? Friday, September 6, 1996.

My ninth time seeing him play and he did not disappoint. My all time favorite album is Grant Lee Buffalo’s ‘Mighty Joe Moon’ and he played Rock of Ages, Mighty Joe Moon, Lady Godiva & Me, Honey Don’t Think, and Mockingbirds from the album. The whole set was wonderful with requests, old tunes, new tunes, and as always, the best stage banter. Classic show.

I like this band. They were very enjoyable. If this doesn’t sound like the most ringing of endorsements, well…maybe I would have liked to see them with a full band? I don’t know, I dug the trio vibe, I really did. Or maybe I was just anticipating GLP too much to get into them wholeheartedly. Either way, I would see them again, hopefully with their bassist and drummer.

Think for a moment of your all-time favorite musician, the one who’s music has changed your life in a way that no other has. For me, that person is Grant. I suppose I could wax poetically for some time about the endless hours of discovery and solace I took in his music (I’ll spare you my dear readers). Let’s just say that I jump at every opportunity to see him play. This short session (at times backed by the Winterpills) was just a tease for the fantastic show he put on later that night. Listen to the set here. 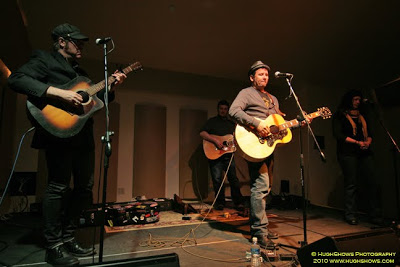