“The Garment District is music by multi-instrumentalist Jennifer Baron, a founding member of Brooklyn’s The Ladybug Transistor (Merge). Her debut tape, Melody Elder, was released on Night-People in late 2011 and her latest 7″ on La Station Radar features a remix by Sonic Boom.”

The Garment District’s latest effort is the fantastic “If You Take Your Magic Slow” via Night-People Records which you can pick up locally at Mind Cure, Sound Cat and The Attic. Or you can snag it as they celebrate with a release show this Sunday at Brillobox. The band’s leader Jennifer Baron previously succumbed to my questioning for their last album and now it’s her hubby and band keyboardist Greg Langel’s turn. I want to thank him for taking the time to participate in this edition of First/Last. 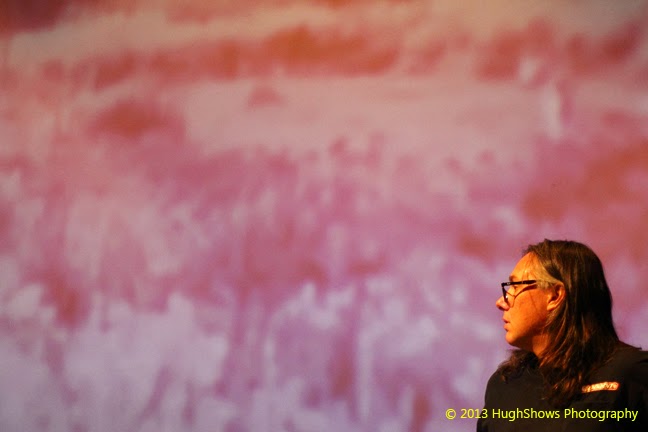 I don’t buy many albums these days, as I am more focused on 45s — however I do purchase full-length releases occasionally. Eleventeen Eston’s “Delta Horizon” cassette (Not Not Fun Records) was the last full-length release I bought — and, on vinyl, it was the excellent various artists compilation, “WarfaringStrangers: Darkscorch Canticles” (Numero Group).

That’s a tough question for me to answer because I have so many favorites. I spent 15+ years tracking down and enjoying compilations of mid-to-late 1960s 45s by various artists. I’d say that two of these compilations, “Psychedelic DisasterWhirl” and “Acid Dreams“, are good candidates for favorite album of all time.

I stopped creating and carrying high levels of expectation for works of art a long time ago, so I try to experience things like albums without great expectations and determine if there’s anything meaningful or appealing about them. With this approach, I am not often disappointed — and I try not to spend time thinking about art that doesn’t appeal to me.

The amazing Smokey Emery (from Austin, TX) at Abandoned Store in Swissvale.

Hmmmmm… Maybe Kenny Rogers at the Aladdin Theater for the Performing Arts in Las Vegas, early 1980s(?) I don’t dislike Kenny Rogers. I just remember feeling trapped and bored! Gallagher (the prop comic) was the opening act — that part of the show was very good!

One of the things that drew me to Pittsburgh is the city’s rich and colorful musical history. Living here, I’ve had the opportunity to meet legendary innovative figures like Mad Mike, Terry Lee, Bob Mack, and Porky Chedwick — and hang out in some of the world’s best record stores! Being surrounded by people who love and appreciate all sorts of music makes me happy. I think Pittsburgh is a real hub for music fanatics.

Thanks, Greg. Those are some pretty obscure records you dig! And by obscure I mean way awesome!