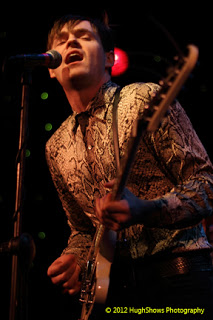 Ever stumble upon a band cold, not knowing anything about them and wonder where the hell did these guys come from? That’s just what happened to me with Hacienda, who were opening for Grace Potter. Their infectious blues rock was an eye opener to me and made perfect sense when my man Darin from The Buffalo informed me that they are Dan Auerbach’s backing band when he plays his solo gigs. Talk about a group to watch out for!