This entire night, opener and headliner, was such a surprise to me that it had to make the year end list. I heard a little noise about this band, mainly from the not so subtle adulation of my man Scott Mervis. I was knocked over by the band’s first song, blistering out of the gate on a sunny early evening outdoors, no less. They never let up and despite the unusual setting for a hairy ‘bar band’ (I use that term with the utmost respect), they tore through their set with white knuckle abandon…and they were the opening act! I am really grateful that J Roddy took the time to participate in this edition of First/Last. 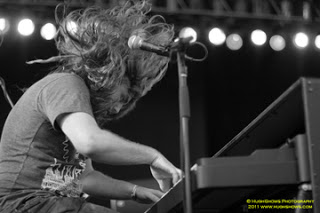 Thanks man. Not trying to be mean with some questions, just honest. Impossible to like everything. Really hope to see you in Pittsburgh again soon.

My man Scott has been pimping these guys large for a few months now, and I finally decided to check out what all his gushing was about. Man, am I so glad I did. These guys came out of the gate smoking and never let up. They sounded really good in the open expanse of the park but I am sure a club setting would be unbelievable for their sound. I won’t the mistake again of missing them anytime they roll through town. More photos here.