“On December 10th, 1999 at 7:30 PM in Santa Cruz, California, the bassist for Kaelber, Tabor McLeod, was born. Two hours later and 2,700 miles away in Morgantown, WV, lead guitarist/lead singer for Kaelber, Noah Myers, was born. Who would have guessed that 15 years later these two would meet and form the nucleus of Kaelber. During the summer of 2016, the addition of Matt Reese on drums was the final piece to Kaelber and sealed the band’s hard driving, yet fluid sound.”

Kaelber is an up and coming alt rock band from Greensburg who infuse their sound with eclectic elements of funk, psychedelia and thrash metal. They tore it up at the Deutschtown Music Festival this Summer and the sound tech from the venue they performed at, made it a point to let me know that these dudes were the best ‘young’ band he has seen in a long while… if ever! Come see what he was gushing about as the band takes part in The Skyline Party at 2pm, sharing the stage with God’s Green Apples (Noon), Old Game (4pm), and Dinosoul (6pm). Be sure to check out the adjacent stage with performances by London Johnson’s Magnificent Street Entertainment (1pm), Colonel Eagleburger’s Highstepping Goodtime Band (3pm), and Timbeleza (5pm) rounding out the all day festivities hosted by your’s truly. I want to thank Noah Myers (Guitar/Vocals) for taking the time to participate in this edition of First/Last.

Thanks, Noah. Jeez, you are a youngin’. First show in 2014? I was a decade into HughShows by then. Looking forward to hearing you rock out, man! 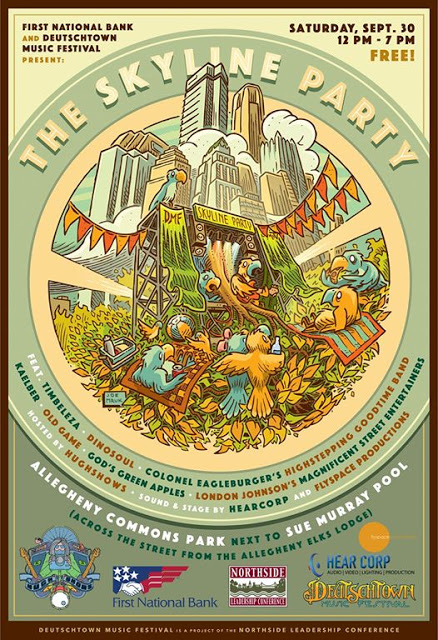