Ms. Edwards will always hold a special spot on this here blog. Her last album was my favorite of the year back in 2008. She also holds the distinction of being the very first (and second) live review when I started this thing nearly four years ago. Of course I was going to hit her show when she eventually swung through town again promoting her latest release. Thing is, she was good but could never reach the high mark from the last album. Still I am glad I went for sure. It’s been a long time I was on the Southside after 10 p.m. and I have to tell you it’s gross. Here’s another review (with an incredible photo, I might add). More photos here. Opener Hannah Georgas, who also sang back up in Kathleen’s band, was the long lost twin of Pittsburgh very own Brooke Annibale, even down to the way she held her guitar. Freaky 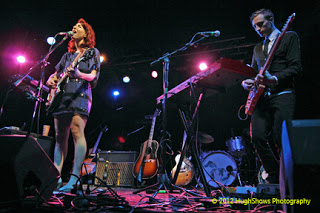 Last nights show at the Rex was probably my favorite of the year so far. I did like the acoustic set earlier in the day but this gal can get down with her band. A bonus was the crowd wasn’t too packed with lots of room near the stage.

Awesome as always WYEP In-studio session today. The performance consisted of Kathleen and her man Colin on a couple acoustics. What a tease for tonight. Back To Me/Asking For Flowers/I Make The Dough, You Get The Glory/The Cheapest Key How awesome was it? I finally became a member of YEP after realizing all the great music I have witnessed because of them. Listen here.