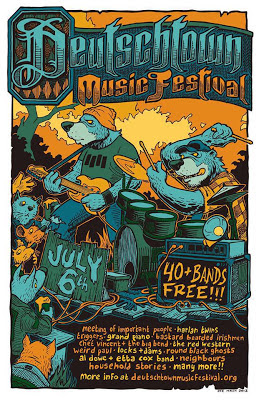 “Deutschtown Music Festival is a free show, on July 6, 2013, in Pittsburgh’s Deutschtown neighborhood
in the Northside, featuring more than 40 bands/performances at an
outdoor stage and multiple indoor venues. An opportunity to experience
Deutschtown’s burgeoning music scene!”
For the next several days leading up to the inaugural Deutschtown fest, I will be featuring a local band playing. Check out the complete line-up here. Today’s band is Locks and Dams, who will be performing the on the main outdoor stage on Foreland Street at 5 p.m. My thanks to Bill Schill (Guitar/Harmonica/Vocals), Nate Campisi (Bass), Zachary Smith (Banjo/Guitar/Vocals) and Chris McCune (Drums/Vocals) for taking the time to participate in this edition of First/Last. 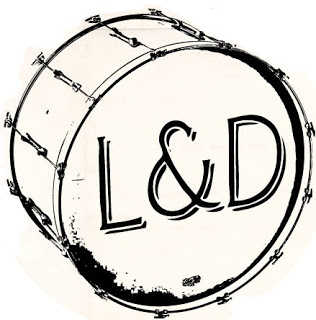 First album you ever bought?
Bill Schill: First album I ever bought was “Punk-O Rama 3” although my parent’s
passion for the oldies definitely left a mark. Story has it I danced a lot to
the ‘Axel Foley’ theme from “Beverly Hills Cop” when I was real small as well.
Nate Campisi: “Led Zeppelin II” and Neil Young’s “Rust Never Sleeps”.
Zak Smith: First album I ever had was the ‘Wayne’s World’ soundtrack. First
album I bought was Nirvana’s “Nevermind”.
Chris McCune: I grew up listening to a steady stream of Beatles and Hendrix. The
first stuff I was buying with “my own money”, like around 5th grade was stuff
like The Cranberries, Primus, Squirrel Nut Zippers, The Mighty Mighty
Bosstones, and a variety of mid/late nineties alt,ska/punk. I feel the physical
format is still king here in Pittsburgh. This town is such a record collectors
treat, we have so many great independent record shops.
Last album bought?
Bill: I think it was Hot Water Music’s “Exister”.
Zak: Jeru the Damaja, “Wrath of the Math”. I just updated it from having the
tape.
Chris: Recently, live Joanna Newsome, live Neil Young and Crazy Horse’s “Year
of the Horse”, Sun Ra’s “Bad & Beautiful”, Freddie Hubbard (a lot of the
CTI releases), Lee Perry’s “Roast Fish, Collie Weed, and Cornbread”.
Favorite album of all time?
Bill: I don’t really have one of those because I like a wide variety of music.
But the ones I can’t put down right now are: Red City Radio’s “The Dangers of
Standing Still”, Neko Case’s “Blacklisted”, and any of the ‘Revival Tour
Compilations’.
Zak: A few that come to mind are Townes Van Zandt’s “Self Titled”, Bobby’s “Self
Titled”, The Rolling Stones’ “Let it Bleed”, Percy Sledge’s “Greatest Hits” and
Tom Waits’ “Bone Machine”.
Nate: The Rolling Stones’ “Let it Bleed”, “Sticky Fingers”, and “Exile on
Main St.”, Paul Butterfield’s “East-West”, Tapes n’ Tapes’ “The Loon”, Black
Angels’ “Passover”, Lonnie Mack’s “The Wham of That Memphis Man”, Fleetwood Mac’s
“Kiln House”, Misfits’ “Static Age”, Bobby’s “Bobby”, Beach House’s “Teen Dream”,
Spooky Tooth’s “Spooky Two”, Calexico’s “Feast of Wire” and Sleep’s “Jerusalem”.
Current favorite album is Pretty Things’ “Parachute”.
Least favorite/most disappointing album?
Bill: I don’t know if I have anything like that. Nothing comes to mind,
although I was disappointed with Iron and Wine’s latest album when it came out.
It wasn’t bad, it was just and different and wasn’t what I wanted to hear.
Zak: There was a Ja Rule album that ended up in my car somehow….probably that.
First concert attended?
Bill: I don’t remember. Factually, probably some terrible kids show. But to be
hip let’s say it was some awesome punk band in a basement somewhere. “I’m
pretty sure I was the only one there.”
Chris: 1998 ‘Sno-core Tour’ with Primus, Blink-182, The Alcoholics, and The
Aquabats.
Last concert attended?
Bill: Saw Gaslight Anthem in Atlanta and they pulled my heart strings and
rocked me into ecstasy.
Zak: Cold War Kids.
Chris: Come Holy Spirit (an awesome Pittsburgh band with one of the city’s best
drummers).
Favorite concert ever?
Bill: Very possibly the one listed above, as I am still feeling the nostalgic
after effects.
Zak: Raconteurs at Stubbs, Old Crow Medicine Show at Mr. Smalls, Dan Auerbach
at Mean Eyed Cat, every Deer Tick show I’ve seen.
Nate: Sleep, 2010 in NYC. Beach House, 2012 in D.C. Mogwai,10+ years ago at
Rosebud in Pgh.
Least favorite concert ever?
Bill: I think my last Warped Tour I went to was garbage.
Zak: I got free Carrot Top tickets once. I already assumed it would be bad so I
gave them to my sister. I think she had fun though…I forget.
Nate: Clap Your Hands Say Yeah.

Bill: Predispositions aside, there are so many awesome things about Pittsburgh.
When it comes to music, the “scene” here is incredible because of the variety
of musical artists that are here and on top of that, many, many, many of them
are extremely talented. It’s sad in a way because the ‘Burgh doesn’t get enough
recognition for the music it puts out and it is usually at the front of the
next big style. One of my favorite personal stories involves copious amounts of
alcohol at Dee’s in the Southside and then waking up on a side walk in Mt.
Washington outside of some house party. Three years later, my best friend ends
up renting the same house…weird.

Zak: Too Many. I love this city.

Chris: Pittsburgh is the greatest city in America.

Thanks, guys. Man, is this fest going to be awesome!