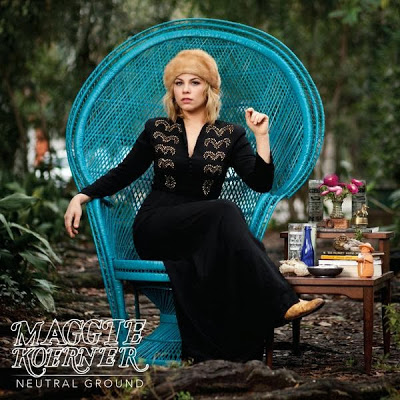 “Maggie is a a Louisiana grown soulful sweetheart who’s raspy vocals are
as mystifying as the of the Voo Doo portrayed in the amazing music video
for her single, “Neutral Ground.”  The 9 minute video not only
showcases Maggie’s blues infused music, but also the magical world of
the Southern swamps.  Alongside releasing the music video, this rising
star was recently featured on Bravo’s Top Chef New Orleans theme song
and is currently touring with funk and jazz jam band Galactic.  Maggie’s
wetland story accompanied with her fresh, genre-defying sound is sure
to captivate audiences of all sorts.”
Check Maggie out at her official Website, Facebook, MySpace, YouTube, Twitter and Instagram. Maggie’s new album, “Neutral Ground” is available now and I want to thank her for taking the time to participate in this edition of First/Last.
The first album you ever bought?
“Sixteen Stone” by Bush.
Your last album bought?
“Donor Blues” EP by Shakey Graves.
Favorite album of all time?
“The Globe Sessions” by Sheryl Crow.
Least favorite/most disappointing
album?
Every album Sheryl Crow’s released since “The Globe Sessions”.
First concert attended?
Garth Brooks.
Last concert?
Valerie June at Circle Bar, NOLA.
Favorite concert ever?
That’s tough. It’s a combo: 1) Sheryl Crow at ACL, 2008, 2) Kings of Leon at
American Airlines Center Dallas (front and center pressed up against barricade)
10/7/09, 3) Patty Griffin & Buddy Miller at Dallas HoB 4/16/10.
Least favorite concert?
The ones ruined by rude & chatty audiences, intoxicated & unprofessional
musicians or my vertical challenges.
Any thoughts, experiences about
Pittsburgh?
I’ve only played there once before with Galactic on 6/2/13 at Hartwood Acres
for their summer concert series. I had an incredible time. It was beautiful out
there, and we started our set as the sun was going down. The audience was so
vast and full of good energy. We had a fine time dancing all night.
Thanks, Maggie. Hartwood Acres is the best. Free music in a beautiful setting. Really can’t beat that.