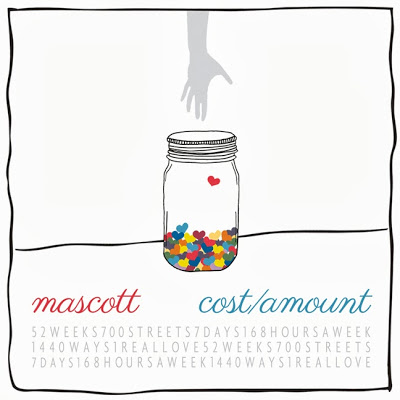 “Kendall Jane Meade named her pop group/musical alter ego after her childhood
nickname: “I’m the youngest of four kids,” Meade explained. “My mom
always called me the mascot of the family. I added the extra ‘t’ to be
fancy.” A very busy lady – musically and otherwise – Kendall has also spent a
great deal of the past 15 years lending her talents to other notable
projects such as Sparklehorse, The Spinanes, and Helium, to name a few.
She has also worked as a fashion copywriter and honed her hook-writing
skills as a co-writer with Doug Gillard (Guided By Voices, Nada Surf),
Austin Hartley-Leonard and Anders Parker (with whom she recently
released a wonderful, critically-praised album of duets called Wild
Chorus).  But Mascott is the musical home base to which she always
returns.”
Check out the band at their official Website, Facebook, YouTube, Tumblr and Twitter. Mascott is singer-songwriter Kendall Jane Meade and a rotating cast of band members helping out. She has just released her latest EP, the lovely “Cost/Amount” via Kiam Records. I want to thank her for taking a few minutes to participate in this edition of First/Last.
The first album you ever bought?
“Duran Duran” eponymous debut album.
Your last album bought?
Laura Veirs “Warp & Weft”.
Favorite album of all time?
Bob Dylan “Blood on the Tracks”.
First concert attended?
Spandau Ballet. It was elegant.
Last concert?
Versus at The Bell House. So good.
Favorite concert ever?
Jennifer O’Connor and Wilco at McCarren Pool. I danced the entire night!

Any thoughts,
experiences about Pittsburgh?
Jeff and Jennifer Baron live here. I’m a fan of the Barons.
Jeff recorded and produced songs on my first EP and LP. He’s amazing.

Thanks, Kendall. Really love the new EP. Nice shout out to the Barons as well. They both have been long time supporters of this blog.