“Raised in Pittsburgh and Philadelphia, Metacara is an electrosoul duo bred from roots in jazz, hip-hop, and electronic
music. Fresh off of the release of their debut EP, “Stone Love”, the couple is determined to bridge the gap between their upbringings in the name of love and creativity.”

Metacara is a Pittsburgh electronic duo who dabble in trip-hop, soul and jazz which you can hear on thier debut “Stone Love” which dropped last Spring. The band have a very special show coming up Friday (10/30) at Cattivo dubbed ‘Devil’s Night Club‘ with Wolkoff from Brooklyn and remix artist No Sleep. I want to thank Kyla Sauber (Vocals) and Vince Nania (Multi-Instrumentals) for taking the time to participate in this edition of First/Last. 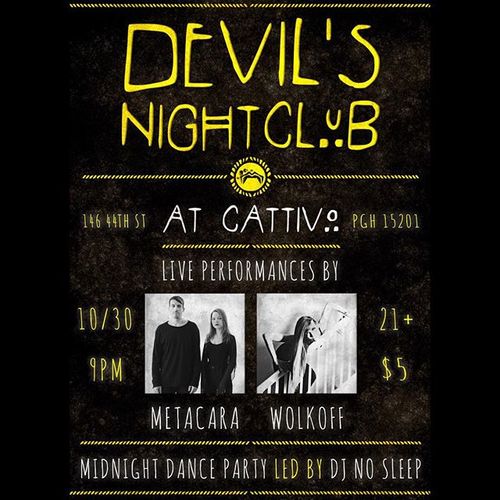 yla Sauber: “Songs in A Minor” by Alicia Keys.

Vince Nania: “No Way Out” by Puff Daddy and The Family.

Vin: Something Corporate, New Found Glory, and Finch in 2003.

Kyla: The WHS Winter Choral Concert (thank GOD those days are over!).

Vin: Foo Fighters at Mellon Arena (it was echoey in the nosebleeds and super disappointing).

Kyla: I hope the bridges of Pittsburgh are seen as a way to unite communities rather than separate them. Pittsburgh has the potential to be a role model for other growing cities to set the standard for collaboration and equal rights. Let’s not screw this up!

Vin: What a time to be a musician in Pittsburgh! Our robust community of artists is growing right alongside our beautiful, promising city. Unlike more saturated cities like New York or Philly, Pittsburgh grants independent musicians the opportunity to make an impact with little resources, but a willingness to work hard. I can’t wait to see what comes next.

Thanks, guys. I wish more people would think like you, Kyla. Bridges are for uniting, not dividing!