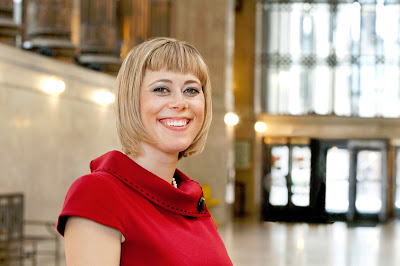 Natalia Rudiak is running for reelection to City Council District 4 and since I’m getting all political here on the blog, I want to thank her for taking the time to participate in this edition of First/Last.
The first album you ever bought?
Either the “California Raisins Sing the Hit Songs” or Michael Jackson
“Bad.”
Your last album bought?
A few new ones have been on rotation… David Byrne & St. Vincent, “Love This
Giant”, Frank Ocean, “Channel ORANGE”, Fiona Apple, “The Idler Wheel …”
Favorite album of all time?
Gosh. So hard to say. Radiohead has always been my jam. Through the good times
and the worse times…
Least favorite/most disappointing
album?
Hmmmmmm….again hard to say. I am always downloading, trading, and listening
to music like crazy, so I have listened to some pretty horrible albums in my
life. If you want to hear the best worst music in the world, Google/YouTube
“Disco Polo”. Think polka + happy hardcore by guys all wearing
matching Adidas tracksuits, and you come close. My mom’s family is from
the middle of rural Poland, and Disco Polo ruled the school there; I remember
tapes being recorded and traded and played over and over until you couldn’t
hear the original version anymore.
First concert attended?
Rusted Root or The Cranberries. Either way it was at A.J. Palumbo. Oh, the
early ‘90s.
Last concert?
Local band The Seams at a neighborhood festival.
Favorite concert ever?
Seeing Radiohead twice in same weekend in New York City in 1997, once at
Hammerstein Ballroom and the other at Radio City Music Hall. It was my first
trek to the Big City. My parents didn’t know that I went (hi dad) but the
Hammerstein show was filmed for MTV’s “Live at the Ten Spot,” and I
was on camera in the front row. I had just gotten all my hair chopped off; my
mom somehow found out about my travels and first saw my new look on TV.  Anyone
who has seen Radiohead up close and personal knows that the show will blow you
away – you can feel the music right through you. We ended up chatting with the
band and getting autographs after one of the shows. I remember a fan asking
Phil Selway (the drummer) to sign a picture of himself and Phil saying, “Oh
dear, I’m so embarrassed, I’m wearing the same shirt today.” It was
humbling to hear that even crazy amazing rock stars were embarrassed by their
finite fashion choices. The whole thing was a classic road trip adventure and I
met folks that I seriously still keep in touch with today.
Least favorite concert?
Many years ago, an adventurous friend and I (along with 80,000 other people)
attended the Werchter Festival, a multi-day camping deal near Leuven, Belgium.
On the first night, the entire campsite was full of raging drunk and scary
hooligans. Then it turned out some of the Belgian people we met were into
neo-Nazi punk. WHAT THE WHAT. The next day it rained and our tent flooded. We
were put up in an abandoned school house – it was freezing and all of our gear
was soaked. As for the music – there were so many acts, it was a total blur. I
remember The Cure and Macy Gray; Moby and Lamb were awesome. I think it was
during an Oasis set, my pal and I got so crushed that we had to get the
security guards to help us get out.  Also, for what it’s worth, Leuven is
where they make Stella Artois and the whole town smelled like beer.  I
haven’t been to a camping festival since.

Favorite thoughts,
experiences about Pittsburgh?
I have so much love for this town, I don’t even know where to start!  I’ll
just leave you with a quote from my grandma, who was born and raised on the
South Side, and talked to every person at the bus stop like they were long-lost
relatives:
“There are no strangers in the world, just people I haven’t met yet.”
– Grandma Rudiak.

Thanks, Natalia. Even though I am technically not you’re constituent, I wanted to have you on the blog and I’m glad I did, your answers were so much fun!