Not at all familiar with their stuff but one a the few chances to shoot the festival’s concerts this year and I took it. I was surprised at the low turn out for all the shows I saw this year. Regardless, for an offshoot band that’s celebrating 30! years, I was highly impressed at the joyous energy coming from that stage. A review here. More photos here and here. 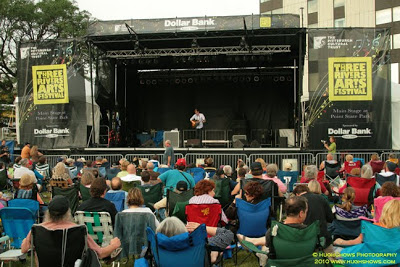 Lead Apostle Andre Whiteman is a member of Broken Social Scene (who isn’t?), the Canadian ‘supergroup’ that’s seems to be taking over the indie rock world. I wouldn’t say these guys were bad…it’s just that my daughters wanted to check out the fountain so I did miss most of the set. More tomorrow.

Don’t get me wrong, The Black Keys are cool. There has been some local ‘uber’-adulation towards these guys since playing here last summer. And yes, while they were good, it all started sounding the same to me after awhile. It wouldn’t kill these guys to get some more band members…just my opinio

Jessica and her band kicked off the main stage musical performances for the 50th Anniversary of the Pittsburgh fest. Her folky vibe was perfectly suited to warm up the crowd for headliners The Black Keys. She reminds me a lot of local gal Emily Rodgers, especially her voice. Her brother David played bass and was extremely cool to me on my quest for band siggys. Thanks man!