I loved Grandaddy. In turn, I love Jason Lytle. His solo disc doesn’t stray far from his old band’s sound and is creeping up to the top of my year end list. As for the show, he was way mellow but sounded incredible in the pastoral setting. I actually enjoyed his set better than Neko’s.

Sorry for the delay in posts but I seriously enjoyed the time off. I am still trying to figure out my role in this ‘burgh blogh community. I want to provide the latest info and and be relevant without being repetitive. My photos do that but damn it’s a ton of work. As I said before I left, I have a ton of stuff backlogged and I am going to start with Jason’s set list. He opened for Neko Case and was amazing and as nice as a person could be. She was good as well but I really don’t think I want to get into that right away, that post is for another day. I will have more images from the show eventually but for now let me just say his solo disc is kicking my world. 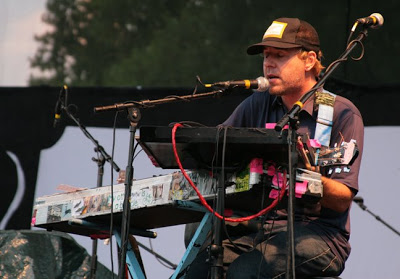 Here’s a little tip for anyone thinking of going to see Neko on July 31. The Riverplex seating chart divides the reserved seats in two sections. As of today the second section went on sale and I scored a couple seats in Row A. I am assuming they are front row seats. Why they sold the entire First Section out before offering up the second section I don’t know. I have been keeping an eye on it for a few months now so if you want killer seats before they get snapped up, act fast.

Watch, the seating chart will be different when I actually show up and I’ll really be in ROW U. We’ll see.