Having been out of the jamband scene for awhile now, I was experiencing a tad bit of Deja vu as I waited at will call for a confirmation for my photo pass. Heads walking up to the window in a party mood, all tie-dyed and excited for the show wondering what kind of unique setlist will the band pull out?

Good times. I am not familiar with the band’s music but was surprised to find that I was enjoying the set, even the jamming, until I knocked over a guy’s drink in the balcony trying to get a shot. O.k., I’ll buy you another one but why would you leave your rum and coke in the aisle anyway? Check out some more photos here. 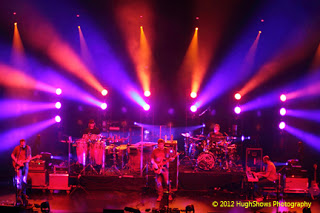 People often ask me just how I get to photograph all of the shows I do? Among many things, it’s a lot of work getting permission from the bands themselves. Take this gig for example. I contacted the Arctic Monkeys, their label, their publicist and the same for openers Smith Westerns. After a week or so of hearing nothing, I sent an inquiry to all involved and was finally granted approval from Fat Possum Records, Smith Western’s label. Cool. Night of the show I find out I am only allowed to shoot them and not the Arctic Monkeys (they are on Domino). One major thing I have learned is not to be bitter, upset or even disappointed in these situations because I feel I am still one of the luckiest music fans in the city to be able to do what I love to do and as often as I do it. Is it surprising I might have got a little annoyed when the band came on and was in near darkness for the entire time I was allowed to shoot? Seriously, no front lights at all? That’s O.K., I am not bitter…Much 😉

Shooting the gig for WYEP, had had no interest in staying past the regulated first three. I actually didn’t stay past the first 1.5 tunes as I was restricted from photographing in front of the stage and had to be back by the soundboard. Stuck with the “Fleetwood Mac” distance, I left as soon as I got all I could. Aesthetically speaking, the dude’s a statue anyway so no real big deal. From I have heard, I missed the concert of the year. Oh, well.

I can’t say that I am an uber-fan of the group. I do like what I hear from them but it seems that with any ‘indie band’ I see anymore, there are some LOYAL fans. There were a lot of people at this show and although I don’t have an exact count, it seemed to be the biggest crowd I have seen at the dozen or so shows I have been to at the venue. More photos here.

As the band came on stage they seemed a little taken aback at the size of the crowd to welcome them. One thing I have been noticing at Stage AE (especially outdoors) is the large crowd already in the venue to show up early for the openers. Talking to Grant afterward, he stated that this was their best show of the tour. Good for you Pittsburgh, representin’! The band obviously fed off that love as they sounded really good.

Clutch are a rock band from Maryland that have been making and releasing music since 1990. Described as ‘the ultimate jam band’ due to their widely varying styles from album to album, they are playing Pittsburgh tonight and their drummer Jean-Paul was cool enough to participate in today’s edition of First/Last Friday.

Weird photo restrictions for this show. I wasn’t allowed to be in the PIT for whatever reason. I am thinking that Lucinda’s peeps didn’t want us blocking the view of the fans in the front rows for the first three songs. Well, if you look at the photos, there is no way the two of us that showed up would even begin to obstruct anyone’s view close to the stage. Instead we had to shoot from the side, which had us standing in front of the fans in the peripheral sections!?!? Yeah, that makes sense. No worries, it’s all good. Another review here. More photos here and here.

Anyone who is at all familiar with my work or who has seen me shooting a show knows that I am a ‘stage hugger’. I feel I have to get up in the musicians grill to get the shot. Sometimes restrictions won’t allow me to get close but usually I am there as inconspicuously as possible. So it was weird not opting to go up during Chuck’s set even though I could have. Maybe it was soaking up the inaugural night of the outdoor venue? I don’t know. To me there is a flatness to shooting from the crowd and well, you the viewer be the judge. As for the performance, he had this raw, ‘Poguesh’ vibe going that, while good, went on about 15 minutes too long.

The last time I saw Social D was back in 1991 opening for Neil Young. Twenty years later, the band sounded fantastic and way more melodic than I anticipated. Christening the outdoor component of Stage AE, the crowd ate up everything the band delivered, which was solid rock and roll. Another review here.

Third time seeing her. I really like her new songs and she and her band are great live. It always amazes me that I seem to be only photog in the PIT during most opening acts? Openers seem to get no love when they definitely should.

I like Bright Eyes. I really like the “I’m Wide Awake, It’s Morning” release. I like his solo and Mystic Valley Band stuff more than his other albums. O.K. got it? I have found that people who do like Bright Eyes, LOVE Bright Eyes. Case in point, talking to some fans in the front row, I found a girl who waited twelve hours in line to be close to the stage. She was from Australia and flew over for this tour. She was on her 24th show so far! Nice. Another fun fact: Playing keys in this configuration of the band was none other than Laura Burhenn from The Mynabirds, a friend of this blog. More photos here.

I really like this band. They were great last year at Hartwood and sounded just as good playing new material supporting Bright Eyes on this night. This is the kind of band that has legs for a long career. The guys are cool as hell in person so it will be nice to see them ‘blow-up’. Earlier in the afternoon they played a studio session at WYEP which you can listen to here.

It’s really been forever since I have seen the band play a proper show. The new tunes sound great and just makes me antsy for the sophomore album even more. This was a free show and it sure was crowded in there. My buddy had his own problems with the venue that night. Bummer.

My third time seeing these guys and frankly, they get better each show. The love coming from the fans is palpable. These are down-to-earth dudes that deserve any and all success coming their way. Setlist and more here. Proper review here (with awesome photo, I might add). More pics here.

Tristen and her guitarist were the opener but you could have fooled me. There were several people there specifically to see her play based on her recently released great album Charlatans at the Garden Gate. My only complaint was the fact that she was minus a full band for the show, which wasn’t a bad thing, just lacking a certain…oomph. Read a proper review of the show here (and admire the awesome picture to boot!). More photos here.

The first time seeing a show at the ‘club’ portion of Stage AE. Only 25 or so other people were there to see that the stage was set up in the corner where the merch table usually is. I was amazed at the sparse attendance considering how great all the bands were that night. I am wondering how these shows can be promoted better to spread the word? Hmmm…On a side note, Ezra was sporting a new mohawk. It takes some serious balls to pull that look off. Video here.

As a genre, I am not the biggest fan of electronica. I’m not one to put on ‘house music’ to get a party started. That being said, I was actually enjoying this set set and surprisingly found myself more than once moving to the beat. It’s always nice to cleanse the palate once in awhile.

I was amazed at the amount of people at this show. This isn’t a household name band but apparently they have a lot of fans around here. The usual three song limit was fuzzy in that I didn’t know when one song ended and the other started. No complaints as they sounded real good.

On a technical note, all my shots were at an aperture value of 3.2. I have a lens that is capable of 1.4 which lets in way more light. Stupid me had the wrong setting which forces the photos to come out very dark. Note to self: Don’t pound beers before a shoot…DUH! Scott Mervis’ review here. Setlist here.

Walking into the crowded venue, I asked the manager if it was a sell out. He said that there were 11 tickets left. With 2400 capacity, there were a lot of people psyched to get their weekend party started. Believe me, I am no stranger to the concert party scene but when I shoot, I am (usually) sober and see a totally different side to things. One thing that struck me were the long lines for the expensive booze in the place. I have heard this complaint from others and it didn’t look like they fixed this particular problem since opening night. Also, when it’s a sold out show, it’s not easy navigating around the room. Hopefully when they open the ‘outside’ in the Spring, things will be more ‘roomy’. Seriously minor quibbles when you take into account that the acoustics and sightlines are really incredible there. That is all that counts anyway.

As for the show, we (me and another guy) got the first song of the acoustic set to shoot. The other dude was sort of freaking out and wanting more time but I am more than comfortable to get what I need in the four minutes they allotted. I guess all my practice is making me near perfect. Key word ‘near’!

What a better way to kick off the opening of the impressive Stage AE facility than to showcase the party that is known as a Girl Talk concert? It seemed everyone there was having a blast and although I bailed early, I am glad I was a part of it. Round two is tonight and if you are going, you have a fun night ahead of you. It’s going to be interesting to see what this venue brings to our city. Judging from last night, a whole hell of a lot. A proper review can be found here.