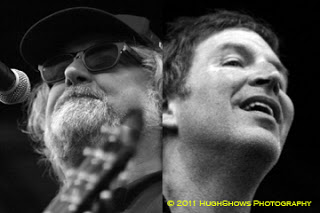 So far this year, I have seen (amazingly to me) around 100 bands play. This show is in hardcore contention to be my favorite of all of them. With a killer opening act to boot, I wasn’t expecting too much from a band that almost exclusively plays songs about baseball. I have zero interest in the sport but the band’s love for the game is infectious and the tunes are fun, catchy and great, regardless of the subject. I had a shit-eating grin the whole set. R.E.M. bassist Mike Mills was pinch-hitting for an absent Peter Buck and I have to say, the band may have been better for it. He actually can sing where Buck cannot and to have them play the Mills’ penned ‘Rockville’ sealed the deal. Just an awesome time. Another review here. More photos here.