“If you’ve seen David Mayfield perform with The Avett Brothers, Mumford & Sons, Jessica Lea Mayfield, or at Bonnaroo, you’ve caught the charisma, the heart, and the comedy, and it’s likely you’ll come back for more. The David Mayfield Parade’s April 1 release “Good Man Down” begs for that same repeated enjoyment. With eclectic, cinematic songs that stir up images of the old West and urban cityscapes, the 12-track album feels like a game changer for a singer-songwriter, band leader, and Grammy nominated producer who stepped out of the sideman shadows with his 2011 solo debut “The Parade.” He likens “Good Man Down” to “Indiana Jones and the Temple of Doom.” Like “Raiders of the Lost Ark,” his first album was lighthearted and fun with nods to the past. His second is darker, creepier, more bizarre and outrageous.”

Check out the band’s official Website, Facebook, YouTube, iTunes and Twitter. The band arrives in Pittsburgh this Wednesday behind their latest release, “Good Man Down“, with support from local favs Dan Getkin & The Masters of American Music. My thanks to ‘jerk front man’ David Mayfield himself as he participates in this edition of First/Last. 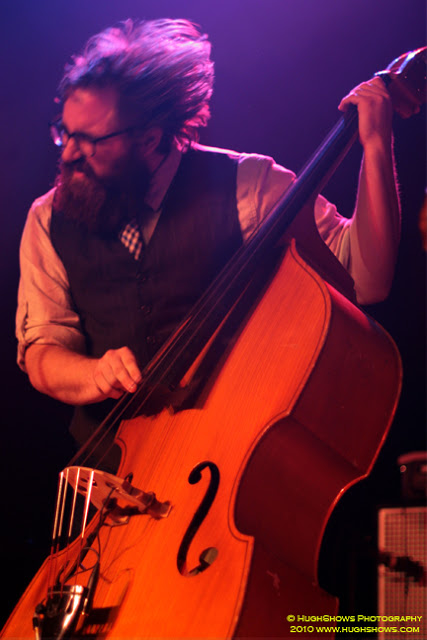 Hmm, I used to buy stacks of records at the thrift store when I was a kid. I didn’t even know who they were I’d just grab whatever looked interesting. Pat Benatar, Simon & Garfunkel, Englebert Humperdink. The first new album I ever bought I believe was “Never Walk Away” by bluegrass band Doyle Lawson & Quicksilver. I bought it directly from the band at a concert at the OJ Work Auditorium in Wadsworth, OH, signed by the whole band. I was 13.

The last album I bought was “Bad as Me” by Tom Waits. What a great record. I really adore that man, it’s nice because I draw pretty much nothing from him inspiration wise into my own music so I can listen to him purely as a fan. I can’t listen to bands or artist that are similar to me because I’m terrified that I’ll hear something that I was gonna do but better, so I just stay away.

This changes for me, but at the time I think it’s still Simon & Garfunkel’s “Bridge Over Troubled Water”. It’s just a perfect album in my opinion. Theatrical, larger than life at times and then fun and intimate. It’s really great.

You know this is hard one. I was kinda disappointed with the new Mumford & Sons record. That’s hard for me to say because they are friends of mine and have helped me out with my career so much. I’m just a big fan of Marcus’s writing and the imagination of those boys. I remember being on tour with them and hearing all these grand ideas for this epic album that would move them forward in their musical journey. I feel like that didn’t happen, I’m sure there was lots of pressure on them to not “fix what ain’t broke” but I feel like “Babel” was just more of the same and not even executed as masterfully as their first album.

I saw Jim & Jesse at the Ohio Coon Hunters Club when I was a wee lad. That my first introduction to big time professional touring musicians. I saw that big old tour bus and said “Yeah, I can do that”.

Just last night I saw a pretty fun punk band in Athens, GA on the roof of the Georgia Theater. I can’t remember their name but I had a ton of fun!

Oh boy, these are hard questions. I saw Darrell Scott play his new album in its entirety at the Station Inn in Nashville. He had a super group of classic Nashville session musicians playing with him. Folks I’ve heard on hundreds of albums and never saw live. That mixed with Darrell’s incredible lyrics and delivery left me floored!

Concerts are kinda like pizza. Bad pizza is still pizza. I’ve always found something to enjoy at a concert. (Even if it’s ridiculing jerk front man all night). I don’t think I could name any one in particular.

I like Pittsburgh! I remember it was the first time I ever rode a subway when I was a kid. I’ve always had a ton of fun playing music in PA. I think its cause I’m from just over the rainbow in Ohio so I can relate with everyone. These are my people!

Thanks, David. Love your honesty on the latest Mumford & Sons album. I am figuring a lot of people feel the same way but aren’t in the position to call those guys ‘friends’.