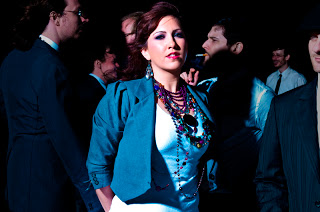 The Right Now
Thunderbird Cafe
Friday, April 20, 2012
Larryville
“There are only so many times you can take back that cheating lover or
accept excuses from a lazy scrub. It’s easier said than done, but one
soul band is taking a stand. The Right Now isn’t going to take it
anymore. The Right Now is fed up. And on their second record, The Right
Now Gets Over You.
The challenging title is a reality check, but delivered with a smile
from singer Stefanie Berecz. “It’s just a representation of the stories
in the songs. Nearly every track has a cheating character, or someone
who’s had enough of their lover. It’s a mixed bag of empowerment and
regret.” Gets Over You continues the “it’s complicated” theme of 2010′s Carry Me Home, although this outing shows Berecz in a darker, seedier role.”
Berecz will display that role as she and the band bring their soulful torch tunes to Pittsburgh tonight at the Thunderbird. Here’s another preview of the gig. Stephanie was nice enough to take some time to participate in this edition of First/Last.

Least favorite concert?
My dad took me to see Neil Diamond when I was a kid.

Any thoughts, experiences about Pittsburgh?
Pittsburgh has always been a great stop along our east runs. There are some
very loyal The Right Now supporters that we are excited to come and see and share the new
album with.