“Zombo’s Ultimate Monster Combo is a graveyard smash! Classics Monster Tunes, Frankenstiened with Cool Creepy Surf Instrumentals & Raw 60’s Garage Rock! With a member history of monster music bands like King Dapper Combo, Graveyard Rockers. Surf Bands Vertigogo and Surfaholics and Rockabilly Band The Vibrochamps you can’t go wrong with this all killer no filler monsterific mayhem. This band plays only the Halloween Season..(which seems to get longer every year!) Past gigs include a 14 year run at Cedar Point’s Halloweekend, The Beachland Ballroom, The Hollywood Theater, plus numerous music venues and private and corporate parties in the Pittsburgh area. The Band dons full skeleton suits and black derbies and puts on a mighty wild and fun for all ages show.”

The Rocking Bones are a seasonal super group of sorts that specialize in ‘monster rock, garage rockabilly and surf music’ that have a bunch of dates around town this Halloween, including this Friday night (10/23) at a very cool event called PBR Presents: A Haunting at Howler’s featuring bands, horrow movie trivia, costume contests, prizes and actual ‘ghosts’ that you do not want to miss. I want to thank Michael ‘Zombo’ Devine (Bass/Vocals) for taking the time to participate in this edition of First/Last. 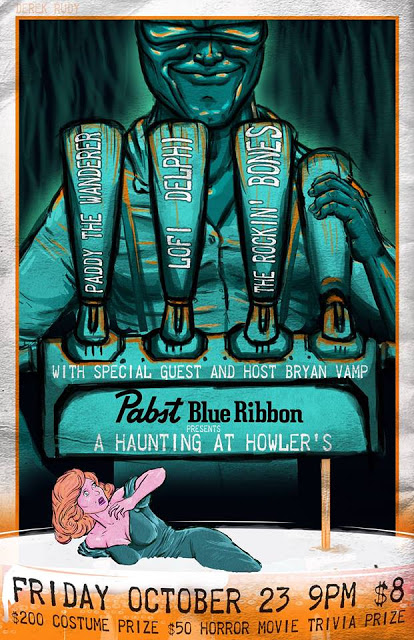 Thanks, Zombo. This show looks like a really good time. I hope Sal makes an appearance!