“Pittsburgh transplants James Thompson and Dan Spagnolo formed their very own brand of distorted, stripped down, 2-piece gunk punk garage music in February of 2014. Influenced by 60s garage rock, 50s rock’n’roll, girl groups, as well as modern garage and punk acts, they arrive at a concentrated amalgamation of rock energy, typically delivered in two minute doses. Come witness their extraterrestrial prowess before they phone home back to the Andromeda galaxy.”

The Spectres are a Pittsburgh garage rock duo and perform at the 31st Street Pub Tuesday night on a bill with Bob Log III and Weird Paul. I want to thank Dan Spagnolo (Guitar/Vocals) and James Thompson (Guitar/Vocals/Percussion) for taking the time to participate in this edition of First/Last. 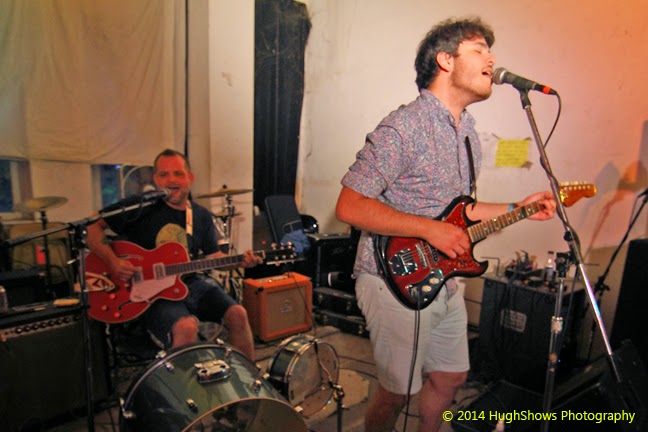 Dan Spagnolo: Pretty sure it was Smash Mouth’s “Astro Lounge”, on cassette.

James Thompson: It was the “Streets of Fire” soundtrack. It would not be until much later that I would make the connection that The Blasters are on that album.

Dan: “Gross Pointe” s/t out now on Dumpster Tapes. Check it out!

James: Something Billy Childish I believe. I think it was a Thee Mighty Caesars album.

Dan: Either “Dorkrockcorkrod” by the Ergs! or “Napalm Dream” by Tenement. And “Leave Home” by the Ramones.

James: Impossible, the ones I can’t live without are: “Ramones” (s/t) / “Flat Duo Jets” (s/t) / Jesus and Mary Chain “Psychocandy” / The Cramps “Bad Music for Bad People”. I don’t know, there are lots of others. Picking a favorite is like chopping off a limb.

Dan: Green Day’s “American Idiot”. There are some good songs on there but everything after that is unlistenable.

James: The newest Black Keys was so bad I gave that shit away.

Dan: Some church show in Long Island that my friend’s ska band was playing with a bunch of deathcore acts when I was 13.

Dan: Radioactivity and Bad Sports, with Activations (who are a great local act!).

James: I don’t know I don’t go to many “concerts”, usually just shows. It might have been Austin Lucas doing a house show.

Dan: The Ergs!/Bomb the Music Industry/Cheeky/Lemuria/Bridge and Tunnel/the Dopamines at the Tap Bar (Knitting Factory, 2008). It was the most amped up crowd I’ve ever been a part of.

Dan: I saw Bad Brains in Philly, 2012. They just all looked so bored, especially H.R. It was fun seeing GZA open, though.

James: The Cramps in Indianapolis. It was like they were just going through the motions. I saw them in Cincinnati and it was a way different show.

Dan: I’ve lived in Pittsburgh for less than a year. I really like it here! It’s kinda hard to make friends outside of work/school but everyone I have met is really nice.

James: I like the history of Pittsburgh. Love seeing the different neighborhoods and talking to the people that have been around to get the histories.

Thanks, fellas. Should be a sweet gig tomorrow.