“The four members of YAWN come from the underbelly of Chicago, with roots in neighborhoods like Little Lebanon, Baghdad Row, and Polski Park. Having grown up together both figuratively and literally, their hearts remain embedded in trash but their dreams of success run deeper than the cold waters of Lake Michigan. ‘Happy Tears’ is a transitional piece: part B-Side, part Single. After a series of tours in support of ‘Open Season’, we were anxious to get back to recording. Returning to Chicago, and finding a lovely new home in a recording studio, we got to work shaping songs that have clung to us since summer. The collection of jams – some moody and dark, some bright and upbeat, represents our perspective on the violent ups and downs of touring life. Languid, aimless day-dreaming, uncontrolled outbursts of zaniness, and all the fluctuating moods of life on the road inspired much of this collection. We only see fit that it’s released for free to our fans who make these experiences possible.”

The band’s latest EP “Happy Tears” is out now on FeelTrip Records. My thanks to Bif Suprem (AKA Daniel) for taking the time to participate in this edition of First/Last. 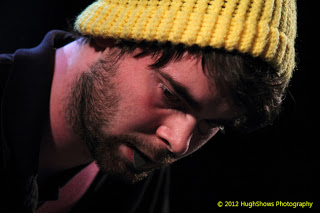 When I was 11 I tagged along with my uncle to a Tower Records (remember those?!). I picked up a fresh copy of Nirvana’s “Nevermind”, as I was paying for the CD there was a bargain bin at the counter that had Incubus’ “S.C.I.E.N.C.E”. I bought that as well for like a buck. I thought I was really cool when they got big the following year, and I was already listening to them.

That is a loaded question, and there is no one answer so instead here’s a few….The Avalanches, “Since I Left You”, Brian Eno, “Here Come The Warm Jets”, The Beatles, “Revolver”, Vijaya Anand, “Dance Raja Dance”.

My uncle was a metal head of sorts. He took me to a Metallica show when I was 12.

Not really a concert, but Onra was in town and played a great set at Beauty Bar.

The Flaming Lips at Pitchfork Fest ’09. They do not hold anything back when it comes to a live performance.

Lollapalooza in ’03 or ’04 or something, Audioslave. What a shitty band name too.

Yeah, I really like the city. We stopped in for the first time a year ago, and since have been back several times. We met some really, really cool people that run the Decade store on the South Side on Carson St., I think. Anyway, they let us crash at their place, showed us around the city a bit and took us to some cool bars, where we met really nice folks. All around one of my favorite places to stop on tour.