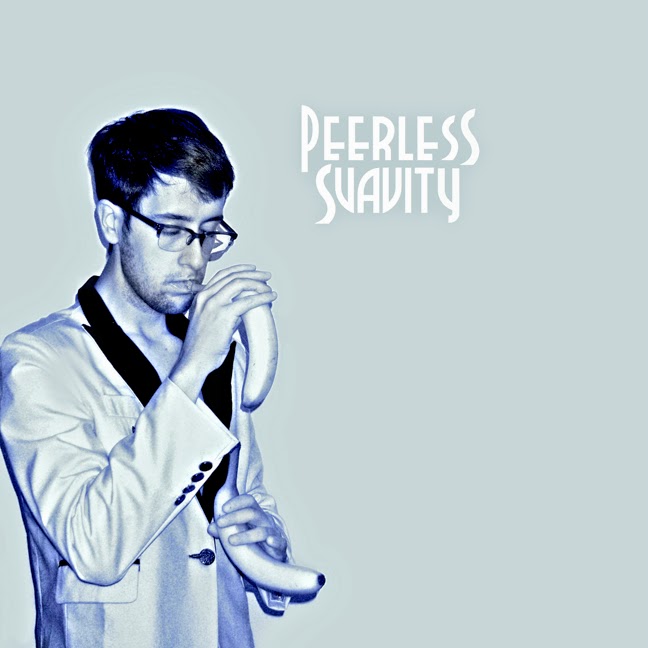 “An experimental, daring, refreshing, sound scape of music…Comparisons to other artists would only rob SM over their unique artistic abilities and expression. They truly are a band that one needs to experience.” – Alan Welding (Pittsburgh Music Magazine)

Suavity’s Mouthpiece is a Pittsburgh based experimental pop band that has a brand new album, “Peerless Suavity” out today via Purple & Pink Records and they are celebrating tonight at The Union Project with Midge Crickett, The Spectres and Nevhar Anhar. Much thanks to J. Trafford (Guitar/Vocals) and Dick Whiskey (Guitar) for taking the time to participate in this edition of First/Last.

J. Trafford: My tenure in cassettes surely predates this by many years, but the first disc I can remember purchasing was a low-budget German compilation called “Pop Nuggets”. If you research this double-CD, you will find a shocking smattering of pop artists like Gloria Gaynor, Barry Ryan, The Communards shoved together in the same small room as Elton John for seemingly no reason at all. Dick Whiskey: Either Green Day’s “Dookie” Or The Offspring’s “Americana”.

J.: Oohf.. Germanotta’s joint-album with Tony Benefit isn’t out just yet, is it? Oh well, I’ll have to say “Unanswerable Lust” by Luxuria.

Dick: Slipknot’s “Vol. 3”.  J.: I was sufficiently disappointed that Prinzhorn Dance School could not match their first effort. No more really needs to be said.

J.: Bob Dylan, in 2000 playing the AJ Palumbo Center. I was so put-out that he was a rickety, incomprehensible shadow of the man who wrote “Tangled Up in Blue,” that I sat down on the floor and pouted for the duration.

Dick: I have no earthly idea.

Dick: The DIY Community and local artists in the city.

J.: Sharing a stage with Madame Christiane D will always be a life-highlight. And thank God we were able to put on Moran / Masudi recently.

Thanks, guys. Totally digging what I am hearing of your stuff. Have fun tonight.